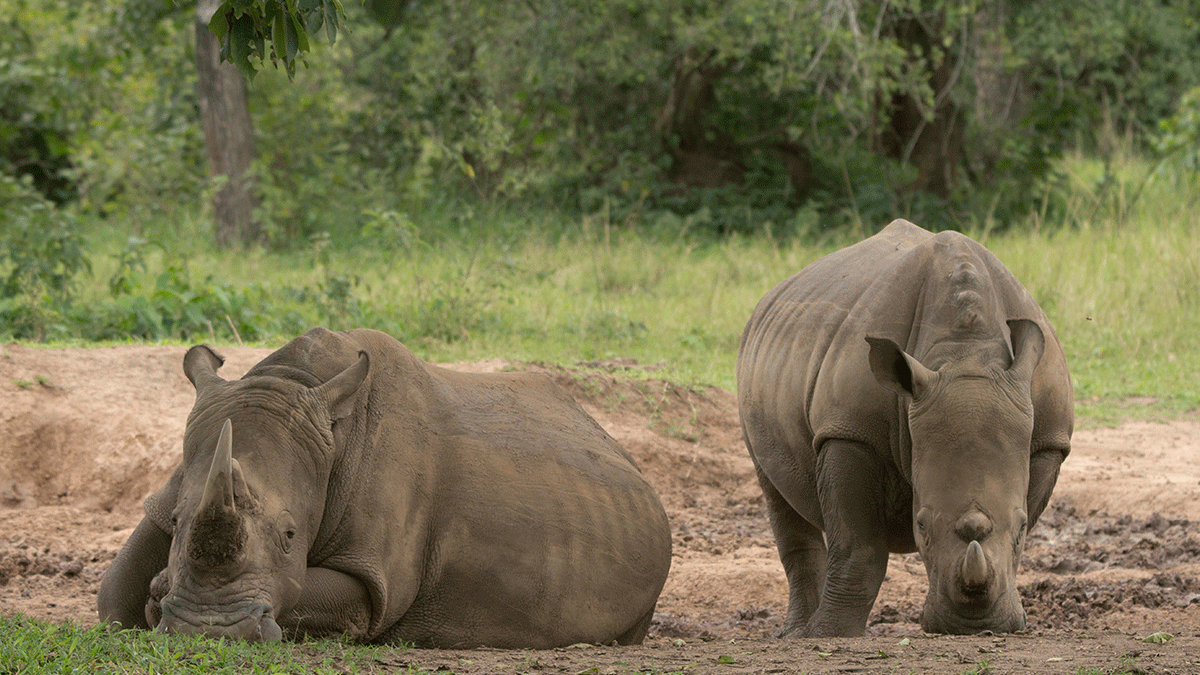 The Ziwa Rhino Sanctuary has an interesting history. Because of the great variety of wildlife in Uganda in the early 20th century, the tourism industry thrived. One major reason for the tourism boom was the sizeable population of Rhinos roaming freely in Kidepo and Murchison Falls National Parks. The Colonial government and Uganda’s first government after independence maintained tough policies against poaching of white Rhinos. Everything turned upside down because of insecurity in the late 70’s and early 80’s creating room for unprecedented poaching that eventually wiped out wild White Rhinos in Uganda’s National Parks.

However everything was not lost. The Rhino Fund Uganda was formed in 2005 and worked in coordination with the Uganda Wildlife Authority with the goal of reintroducing White Rhinos to the national parks in the future.  In order to realize their long term goal of introducing Rhinos back into the Uganda wild, it was thought that a sanctuary needed to be set up that would be used as safe breeding ground away from poachers. The Ziwa Rhino sanctuary was launched starting with 6 Rhinos (2 from Disneyland America and 4 from the neighboring Kenya) enclosed in land measuring 70 sq. Km and protected by 2m high electric fences. The sanctuary is located in Nakasongola District along the Kampala – Gulu Highway just before reaching Murchison Falls National Park. It currently has a total of 22 white Rhinos thanks to efforts of highly trained and committed researchers, rangers and donors.

The Ziwa Rhino sanctuary is one of the most important wildlife conservation projects in Uganda. It is one of the 20 best places to visit on a Uganda safari. The Sanctuary is the only place in Uganda where visitors can track the endangered White Rhinos by foot and at a close range.  Because of the sanctuary, Uganda is one of the few countries in the world where the Big 5 (lions, leopards, rhinoceros elephants, and buffaloes) can be spotted.

Why visit the Ziwa Rhino Sanctuary

Although most tourists come to Uganda with the intention of seeing the mountain gorillas in Bwindi/Mgahinga or going for a safari in the other major national parks, more adventurous ones have since discovered the treasure that lies within the Ziwa Rhino Sanctuary. Visiting Ziwa Rhino sanctuary has become a must for those who wish to experience a full African Safari in Uganda. Apart from tracking the Rhinos, there are several other activities that make the sanctuary attractive to tourists. They include.

Rhino tracking is the man activity in the sanctuary and is a good warm up before continuing to the Murchison Falls national park for even greater activities. The activity involves a 1 – 2 hour guided walk or drive within the sanctuary. Once you reach near the Rhinos with a car, the guides will take you on foot 7 meters close to the Rhinos. You will enjoy watching these endangered animals continuously feeding on fresh vegetation without bothering about your presence. Tracking the Rhinos costs $ 45 for international visitors.

Another prominent activity open to tourist while at the sanctuary is bird watching. This activity can take the whole day and involves guided walks, driving and a boat cruise through the four birding trails. As you move through the swamps, woodlands and the savanna plains you will be able to spot 350 species of bird. Most of them come from the nearby The Ziwa Rhino Sanctuary in Uganda Murchison Falls National Park while others are residents. The top species to look out for is the rare but highly sought out Shoebill Stork. You can also spot the African Black Crake, African Black Headed Oriole, African Citril, African Crowned Eagle, African Darter, African Fish Eagle, African Golden Breasted Bunting, Blue Spotted dove, Booted Eagle, Broad Billed Roller, Bronze Manikini, Brown Backed Srub Robin, Brown Crowned Tchagra, Brown Parrot, Brown Throated Wattle Eye, Cardinal Woodpecker, Giant Abdim’s Stork, Speckled Breasted Woodpecker, White Crested Turacos and many others.

Walking through the Sanctuary will reward visitors with beautiful scenery of green tropical vegetation and bushes. The great biodiversity in the Ziwa Rhino sanctuary is a great taste of the things to come during your Uganda Safari. Ziwa Rhino Sanctuary in Uganda the Rhinos are the main attractions but the sanctuary has a sizeable number of butterflies, reptiles, primates and mammals. The other mammals roaming the sanctuary are the Bush Duiker, Waterbuck, Ground Squirrels, Oribi, Hartebeest, Mongoose, Grey Duiker, Reedbuck and Bush-Bucks Among the small primates found in the sanctuary are the common Vervet Monkey and the black/ white Colobus Monkeys. During your nature walk, look out for the large lizards, pythons, insects and numerous species of butterflies.

Enjoying your time at the Ziwa Rhino Sanctuary does not need to end during the day – It can go on well through the night. A guided night walk will allow you discover new sounds under beautiful moonlight in the Africa wilderness. As you move through the night with knowledgeable guides, prepare to encounter some of the sanctuary’s nocturnal resident animals, bats and birds.

Note: International travelers interested in activities other than Rhino tracking like canoeing, Nature walks, Birding and Night walk usually pay a flat fee of $30. There are packages for those desiring to combine Rhino tracking with any of the other activities costing up to $65. Those who are interested in only entering the Sanctuary only pay the entrance fee of $50. The best way to organize your tour of the sanctuary is through your tour operator. The Tour operator will not only pay the fees on your behalf but help arrange the transportation and accommodation during your tour.

Rules and Guidelines while tracking Rhinos at the Ziwa Rhino Sanctuary

Like any organized and reputable establishment, the Ziwa Rhino Sanctuary has got set rules that need to be strictly adhered to by visitors. There is a fine of $100 for those who deliberately refuse to abide by the rules. The Guides have full authority to end any activity abruptly if they feel that certain rules are not being followed: Visitors should follow these rules while at the sanctuary:

Follow instructions given to you by the Sanctuary guides at all times. Feel free to ask them any questions regarding the rules and the animals.

-Report to the Rhino Fund Reception any illegal wildlife kills along the road.

-Any unguided/unauthorized tour activity is considered illegal. This is especially so if it is done beyond 17:30 pm.

-For your own safety and that of the animals, any attempts at feeding or touching them are forbidden.

–Littering is strictly prohibited within the Park. Any litter should be properly disposed in the available bins.

-Cycling and jogging cannot be done anywhere and at any time within the Sanctuary.

While at the entrance, declare any firearms, GPS, Pets, Drones or any other item that may cause suspicion.

-Unnecessary noise of any sort within the sanctuary is strictly not allowed. While with the animals, switch off your cell phones or simply put them Silent mode.

Like any safari or wildlife tour, you need to prepare in advance to have a memorable time while at the Ziwa Rhino Sanctuary.  You need to start with the basics like a valid passport, visa and yellow fever vaccination card.  After the essentials are covered, you need to ensure that you move with your travel itinerary, local currency notes and an emergency local network shim card. Try to secure a medical and travel insurance before traveling to Uganda.

Tracking Rhinos is less demanding compared to other wildlife activities in Uganda like Gorilla Tracking. The dressing code can be simple and a simple light shirt and pant that are of dull color. Hotels and Lodges at Ziwa Rhino Sanctuary Pack a sweater or waterproof rain jacket because it could rain at any moment.  Move with simple comfortable walking shoes, sunglasses and a hat during the dry season.

Accommodation at the Ziwa Rhino Sanctuary

In order to ensure that the sanctuary had everything travelers needed while visiting, the Rhino Fund Uganda came up with an idea of a Lodge located within the sanctuary. They sold the idea to the Genade Family who were more than happy to provide funds for a high quality safari Lodge. This is how Amuka Safari Lodge came to be.

The lodge is built with beautifully molded timber, natural stones and canvas finishing. It has 8 units with 4 Luxury rooms that are furnished with private bathrooms and balconies. Both international and local cuisines are served including the famous Rolex. Other facilities include a well-stocked bar, swimming pool and electricity (available 24/7). 10% of the total earnings from the lodge are used to fund activities related to conserving the endangered Rhinos.

N.B: There are several other lodges and hotels that offer quality services but we recommend them with reservation because none is located within the sanctuary premises.

Safari vacations and travel services will arrange for this visit to the rhino sanctuary in Uganda, just like we said this activity can locally be tailored to suit your budget and interests. Feel free to get in touch with us, we can again be helpful in booking the accommodation, the permits and the related services.

What is the best time to visit Masai Mara?

Travel Information in Uganda and Rwanda