The Great Migration in Africa 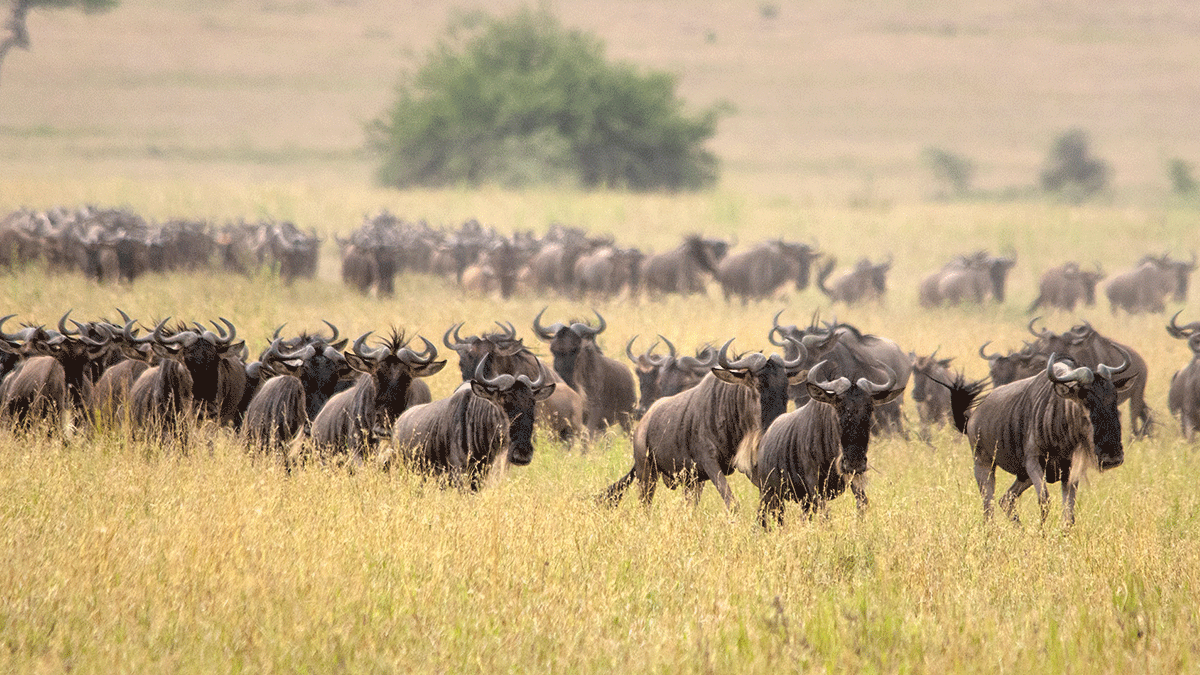 The great migration in Africa

The Great Migration in Africa refers to an annual and circular movement of about 1.5 million wildebeest between the Serengeti National Park and the Maasai Mara National Reserve in Kenya. The Wildebeest is accompanied by 200,000 zebras, 400,000 Thomson’s gazelle, 12,000 eland, and predators ready to make a meal of any strugglers. Some Researchers believe wildebeest can smell rain in the air from thousands of miles away. The wildebeest migration is considered to be one of the great natural wonders of the world. Some even refer to it as “The Greatest Show on Earth”. The journey is about 800km long and treacherous, especially for newborns, the vulnerable, and the weak. The migrating animals have to deal with both resident and migrating predators (crocodiles, lions, hyenas, cheetahs, and leopards). About 3000 lions follow the migrating herds.

A key part of the wildebeest migration is the River crossings. These river crossings occur in the Grumeti (Serengeti) and Mara (Tanzania and Kenya) rivers. As they attempt to cross these rivers, huge crocodiles Great Wildebeest Migration in Africa waits patiently to grab and drag them to the bottom of the river using their strong jaws. The wildebeest migration offers a great spectacle for those interested in wildlife hence making the Maasai Mara and Serengeti one of the most visited national parks in Africa. Observing such large numbers of wild animals migrating across the vast savanna plains is difficult to describe. The river crossings and calving period are equally memorable. There are no fences to separate the two parks in order to aid their migration hence forming arguably the greatest wildlife conservation ring in the world.

What causes this great Migration in East Africa?

Researchers still struggle to explain what exactly causes the great migration in Africa. However, we now know that it’s all about the instinct to survive. Fossils found in the area show that wildebeest have been Great Wildebeest migration in East Africa the area for over 1 million years. Evolution has coded into their DNA the instinct to migrate in numbers. Wildebeest and other herbivores cannot survive without rain. Without rain, the quality of the grass reduces and this could lead to starvation for the herd. By following the rains, the wildebeest know that they will always have plenty of water and grass. In order to avoid starvation, many of the predators have no choice but to follow the migrating herds. The migrating wildebeest, zebras, and antelopes move in herds to evade the predators and give them more chances of survival.

Note: Not all the wildebeest, zebras, and other herbivores migrate. There are many that choose to remain residents of only the Serengeti National Park or the Masai Mara National Reserve. These resident mammals allow tourists to visit these parks all through the year. If you miss out on the migrating animals, you can expect to see those that remain in one area.

The great herds do not stay in one place for long and are constantly on the move. Knowing the rainfall patterns can help know where the herds are located in a particular week. However, with global warming, it is becoming more difficult to predict with precision where to find the migrating animals. We will be discussing the broader pattern of the migration shortly.

Beginning from late November to mid-December, the animals move away from Kenya in splinter groups and graze on the Eastern and Central plains of the Serengeti. By late December, they can be found grazing around the Ngorongoro Crater and the Ndutu plains. This is the best time to observe the Great Migration in Africa’s endless war between predator and prey. The Serengeti has the largest population of lions in Africa. Watching them welcome back the migrating wildebeest, zebras and other antelopes are brutal but interesting.

Other than following the migrating wildebeest, tourists also have an opportunity to explore the amazing Ngorongoro crater. This crater was formed over 1 million years ago when a giant volcano (bigger than Kilimanjaro) collapsed on itself leaving behind a floor that is 610 meters deep and 260 square kilometers long. The crater trapped many of Africa’s famous wildlife including the big 5 in a paradise. The Ngorongoro crater has the densest lion population in Africa. Most animals living in the crater do not migrate at all because there is plenty of food throughout the year.

Between January and March, the herds are still in the Southern Serengeti plains. Food is in plenty and the soil is rich in nutrients. This is when the females begin to show signs (extra heavy bellies) of getting Wildebeest migration in Africa ready to give birth. Calving starts late in January and goes on up to mid-march. February has the highest calving rate with about 8,000 wildebeest born each day. By the end of the calving period, over 500,000 cute wildebeest calves are born. This is a good replacement for the 250,000 that die in the course of the migration due to exhaustion and thirst Tourists who are interested in witnessing the calving season should visit the Southern Serengeti plains in February. The calving period draws predators like hyenas, leopards, cheetahs, and lions who will not hesitate to make a quick meal of one of the newborns. The sheer number of births ensures that most survive the predators.

April comes with plenty of rain and the Serengeti plains are lush green and teeming with Africa’s famous mammals. Towards the end of April, the wildebeest sense that the rains are dwindling and the grass becomes scarce and of poor quality. They begin their journey to the Western part of the Serengeti.

April to May – Western Serengeti

Annual wildebeest migration towards the end of April and the end of May, the animals migrate in long lines to the western Serengeti. They are followed by hyenas, leopards, cheetahs, and lions as they mow the grass around the Grumeti and Seronera River. The headquarters of the Serengeti National Park is in Seronera – an area with breathtaking savanna landscape, endless plains, rocky outcrops, and thorn trees. It is where most game drives and hot air balloon safaris are arranged. There are many tourists in this area and they can be seen observing the long lines of animals with their picnic lunch in hand.

By June, most of the splinter groups of wildebeest, zebras, and antelopes would have gathered in Grumeti and surrounding areas. They graze in the area but something eventually triggers the first animal Wildebeest migration in East Africa decide to cross. They first cross the Grumeti River in Tanzania and then the Mara river (a natural boundary between Tanzania and Kenya). This crossing of the Grumeti and Mara rivers is eagerly awaited by tourists. Watching the animals stampede as they cross the rivers and attempt to evade giant crocodiles is the climax of any safari in Africa. Apart from the crocodiles, the wildebeest must choose the crossing point/time right to avoid drowning or being swept away by strong river currents. The lucky ones who survive the crocodiles and river current will be welcomed by tasty grass in the Masai Mara National Reserve.

great migration Africa Between August to October, the wildebeest migration is centered around the Masai Mara National Reserve. The animals spend their time grazing in the vast savanna plains. Grazing is only interrupted by continuous attacks from resident lions, hyenas, and leopards. In October, the quality of the grass in the Mara begins to reduce. The wildebeest begin to sense the coming rains in the Serengeti forcing them to begin their journey back to Tanzania for greener pastures.

Note: The above routes and timings are not always accurate and depend on the rains. Global warming has had an impact on annual migration. It is not uncommon for the animals to reach a certain point earlier or later than expected.

Great Migration in East Africa Each country has its advantages. Witnessing the Great Migration in Tanzania’s Serengeti National Park exposes you to more open plains and an opportunity to witness the calving season. Moreover, visiting the Serengeti also means exploring the amazing Ngorongoro Crater, other amazing national parks, and climbing Mount Kilimanjaro. The Serengeti offers variety but the Masai Mara has a higher concentration of wildlife given its smaller size. We highly recommend that you plan to experience the migration in both countries. Always remember that the two-game parks are part of a wider wildlife conservation area that is only separated by human borders.

Additional Information about the Great Migration in Africa

According to some researchers, Wildebeest manage to successfully overcome all obstacles because of what they term ‘swarm intelligence. Acting and making decisions as a whole not only protects them against predators but also helps them accurately predict the direction of the rains.

Zebras and other herbivores manage to migrate with the wildebeest because they feed on different parts of the same type of grass. There is, therefore, no competition for food because everyone has enough to eat.

It is difficult to predict the time animals will cross the two rivers or get into any of the parks. Tourists are advised to book a longer safari so that they have time to see the animals. It is also important to note that the two wildlife reserves are incredible to visit all through the year. There is more than enough resident game to look out for even when the migrating herds leave a particular area. August and September are thought to be the best months to witness the migration in Kenya.

Witnessing the great migration can be done in two ways. One is by staying in fixed camps and waiting for the herds to arrive or following them in semi-mobile tents.