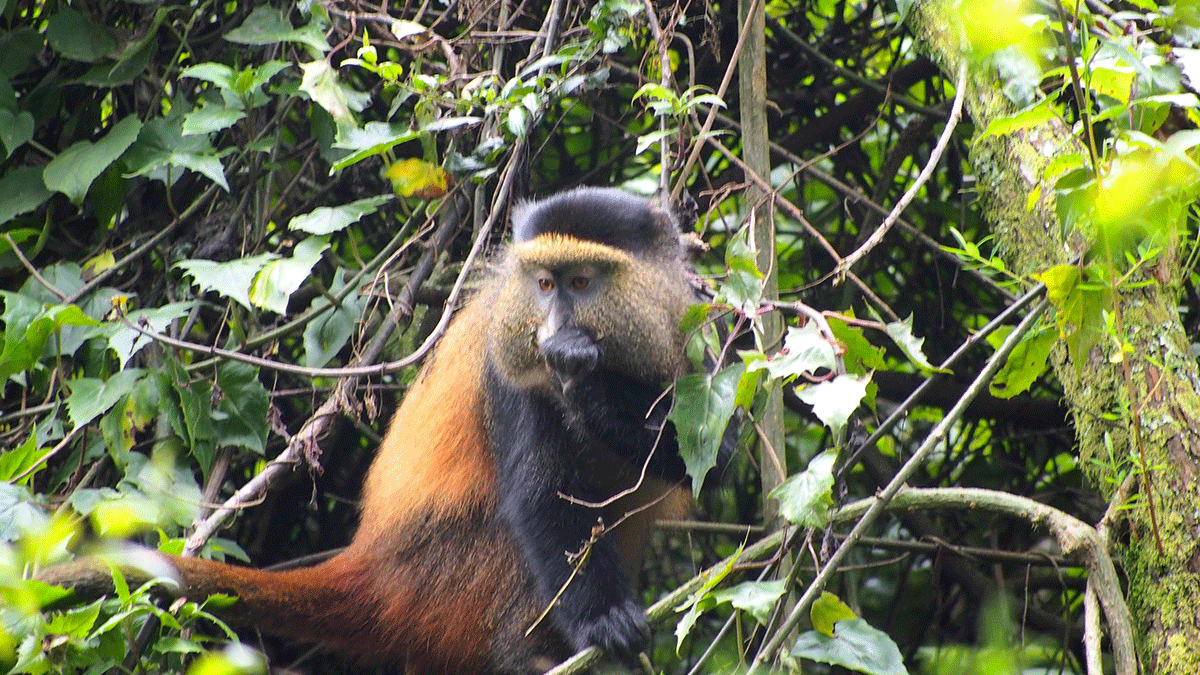 Golden monkey trekking in Mgahinga Gorilla National Park is one of the most amazing activities one can do while in the park for a primate safari. Golden monkeys are an endangered species with 3000-4000 individuals still left in the world. They have a number of colors like black, grey, and a beautiful shade of orange-gold that has them being called golden monkeys. They live in large groups of up to 100 individuals led by an Alpha male and do not move as much for they stay in one location for a time, unlike the gorillas. Golden monkeys feed on bamboo leaves, seasonal fruits, flowers, sprouts, leaves, lichens, and small invertebrates all of which are abundant in the forest.

Golden monkeys live in bamboo forested areas and they can only be found in Virunga Volcanoes where Mgahinga Gorilla National Park lies. Golden monkeys are endemic to the Albertine Rift Valley, and they share their home with the equally endangered mountain gorillas. The park is located in the southwestern part of Uganda in the district of Kisoro. It is in Mgahinga National Park that one can do golden monkey tracking in Uganda.

Golden monkey trekking in Mgahinga Gorilla National Park involves travelers hiking the forest in search of the golden monkeys in their natural habitat. The activity starts at 8 am with an orientation of what is to be expected, and travelers then head out in search of the golden monkeys using the Gahinga trail. The forest comes to life with the noise and monkey activity that the golden monkeys exhibit, they jump from one bamboo tree to another as they play and eat. Travelers are allowed only one hour with the monkeys once encountered and after which, they track back to the starting point. The activity altogether isn’t strenuous and it can take about 3 hours as the monkeys live in lower areas. Children below the age of 12 cannot do golden monkey tracking in Mgahinga Gorilla National Park.

To successfully track golden monkeys in Mgahinga, travelers need to have the right gear like good hiking shoes, long-sleeved shirts, rain jackets, insect repellants, binoculars for the birders, and energy-giving snacks, and water for refreshment during the hike. A hiking stick could also come in handy. You can also hire a porter at the start of the trek to help you during the trek, say carrying your backpack or supporting you while on slippery paths by pulling or pushing you.

Travelers need to first purchase golden monkey tracking permits, which will allow one passage to take part in the activity. The permit costs $60 for foreign non-residents and residents while East African citizens pay UGX40,000 only per person, and can be used only once. The permits can be purchased on the ground from the park headquarters of Ntebeko, or through a reputable tour company.

Golden monkey trekking in Mgahinga Gorilla National Park can be done throughout the year. You can visit the park at any time of the year and be guaranteed of taking part in the activity. Mgahinga gorilla national park can be accessed by both air and road, and also from Rwanda. By road, one can drive from Kampala for about 9-10 hours to the park. Charter flights are available for booking from Entebbe or Kampala to Kisoro from where travelers get transported to the park. The park is easily accessed from Rwanda too, travelers can opt to fly into Rwanda directly and be transported by road on a 4 hours drive from Kigali to Mgahinga through the Cyanika or Katuna border.

There are other activities in Mgahinga other than golden monkey tracking that travelers can take part in, say gorilla tracking, bird watching, nature hikes, visiting local communities, and the Batwa cultural trail among so many others.

Golden monkey tracking in Mgahinga Gorilla National Park is a great activity that travelers visiting the park can take part in together with gorilla tracking. Take time to reach out to safari vacations and travel services or a trusted tour operator to help you plan the best holiday to see the golden monkeys.