Gorilla trekking is a highlight to every dream traveler for primate encounters in Africa. The exercise is basically conducted in three distinguished countries that inhabit the world’s remaining endangered species which are; DR Congo in Virunga Mountains, Rwanda in Volcanoes national park, and Uganda in Bwindi impenetrable national park and Mgahinga national park respectively. A lot of efforts are put in place by statutory bodies to conserve the primates from extinction and it’s upon this that a drastic rise in their population is evident to further necessitate human man encounter to the Gentle Giants of the jungle.

Gorilla tracking is considered as an experience because it gives you a once in a lifetime experience to encounter with the mountain Gorillas in Bwindi Impenetrable Forest National Park and Mgahinga Gorilla National Park, this involves hiking/walking in the forest with ranger guides to search for habituated mountain gorillas, once you find them you learn about them and spend one hour with them.   each group visited per day visitors are limited to 8 people per trek however before trekking is reached, the gorilla groups to be visited should have previously undergone what is termed as gorilla habituation exercise a process which takes between 2-3 years which involves teaching the primates how to relate to human beings in a non-violent way once you encounter them on the trek and this is done by experienced ranger guides coupled with a team of researchers.

Gorilla trekking permits are one of the thoughts of and key essentials while planning for encountering mountain gorillas in Uganda. A gorilla permit is a document that allows visitors to get access to trek gorillas in the defined tracking points. Therefore each visitor is supposed to purchase a gorilla trekking permit either through a trusted local tour operator or through Uganda Wildlife Authority the regulatory organ set up to issue and help in conservation of the great apes in the jungle.

Among all the national parks where gorilla trekking is done, it is safer and affordable to do the gorilla tracking safari in Uganda given the fact the gorilla permit here costs USD700 per person per trek compared to Rwanda which is USD1500 and DR Congo which is USD400 but unstable

The following are gorilla families in Bwindi Impenetrable forest national park open for visitors all year round for trekking experience and each of them has its own history, characteristic and offers unique experience along the trek. NOTE: Bwindi gorilla groups are organized according to the location; Buhoma area currently having 4 groups, Ruhija area currently having 4 groups, Nkuringo area group having 2 Gorilla groups (One group for habituation experience only) and Rushaga area having 5 groups (One group for habituation experience only) and Nyakagezi Family in Mgahinga National Park.

Mubare is the oldest habituated gorilla group in Uganda. It was found in the Mubare hills, deep in Bwindi forest, and was fully habituated in 1993. The family apparently has 9 family members led by one Silverback gorilla

Rushegura gorilla family was brought together in 2002 after one of the silverbacks from the Habinyanja group decided to break away. It derived its name from “Ebishegura” – a tree species that was abundant in the home area of the new family with Mwirima as the lead silverback. Apparently the family has got 18 members including one silverback.

This gorilla family has a fascinating story whereby it was normally sighted around headquarters and it took only 15 months for visitors to visit it, unlike the normal process which takes 2-3 years. Bitukura is a peaceful family including 12 members and 4 silverbacks

The Oruzogo group is the second habituated gorilla family living in the Ruhija area and was habituated for trekking in 2011.The group consists of 23 individuals and is led by Silverback Tibirikwata. It’s one of the most popular families’ playful and energetic juveniles.

The group was opened for visitors and gorilla tracking in 2011 after being habituated. Kahungye Gorilla Family is led by Rumanzi and there are a total of 17 individuals that includes 3 silverbacks, 3 blackbacks, 3 adult females, 3 sub-adult, 3 juveniles, and two infants.

This is a new family in the Buhoma sector north of Bwindi impenetrable forest national park. Katwe family joins the other three families of Mubare, Habinyanja, and Rushegura making a total of habituated gorilla families in Buhoma to four. It comprises of 7 members in the family with one dominant silverback.

The Nkuringo group was named after the Rukiga word for “round hill” and was launched in 2004, currently, the family consists of 19 members including 2 silverbacks.

This family split from the Nshongi Gorilla family to make up its own family with the supreme silverback known as Mishaya who later died in 2004 and was succeeded by Mwine. The family comprises of 12 family members.

Bweza Gorilla group is located in the Rushaga sector with 9 individuals including 1 silverback known as Bweza. Bweza split out from the Nshongi family where it started its own group.

Bikyingi group, whose name also spelled as Bikyingi has 15 members including 1 silverback, 5 adult females, 2 semi-adults, 2 juveniles, and 5 infants. Bikyingi Gorilla Family is one of the two gorilla families in Bwindi available for Gorilla Habituation Experience

This is yet another gorilla family found in the Rushaga sector with 8 family members and dominated by females. The family is led by the dominant silverback Mucunguzi “meaning Savior “named after breaking off from Bweza family.

Kyaguriro Gorilla group is located in Ruhija with 20 individuals who feature a fascinating history which is an attraction of itself, and it’s known as Kyaguriro group A and B, this explains that the group’s habituated in 1995 as a group dedicated to research aimed to learn more about the endangered primates, their traits, characters, biology, reproduction and behaviors among by Manx Planc Institute (MPI) for Evolutionary Anthropology

Apart from Bwindi which boasts of numerous gorilla families, Mgahinga Gorilla National Park has only one gorilla group for trekking. The group is led by Mark, the dominant silverback, who likes traveling and keeps on crossing borders between Uganda, Rwanda and the Democratic Republic of Congo. Apparently the group resides in Uganda with a population of 10 gorilla families including three silverbacks living together in the family.

Bwindi Impenetrable Forest national park has a tropical type of climate with the annual mean temperature ranging from a minimum of 7–15°C to a maximum of 20–27°C Its annual rainfall ranges from 1,400 to 1,900 millimeters. Peak rainfall occurs from March to April and from September to November.

Best time of the year to track mountain gorillas

Tracking mountain gorillas in Uganda may best be practiced in seasons in relation to your holiday or choice of preference on the conditions upon trek and seasons vary in a way that the Peak Seasons for Gorilla Tracking, considered the best months for Gorilla Tracking in Uganda are June-July-August and September and then December-January-February.

What are some of the tailor-made activities on a Gorilla trekking safari to Bwindi?

Batwa pygmies are believed to have been the” indigenous occupants to the mountain slopes of Bwindi impenetrable forest national park. They are as well-referred to as “The Keepers of the forest” Before they were evicted from the forest in the 1990s to attain their current location forming communities around the park as one way of survival and as well benefit from tourism to boost the community standards of living since the eviction from their previous way of surviving in the forest. Given the fact that many visitors are undertaking gorilla trekking experience, it’s more likely to arrange a cultural encounter with some of the natives work like craft shops, cultural walks, and enjoying cultural dances where you can directly support community projects and improve the standards of living of the natives.

Bwindi has a population of over 347 species of forest birds recorded in the Park, at least 70 out of 78 montane forest bird species occurring in the Albertine Rift region are found in the forest, and 22 of the 36 endemic species in the area. This makes the area another birding destination amidst other catchment areas for birds on this park expect to see seasonal migration birds depending on the weather. This activity is mostly practiced especially during the rainy season where you can capture plenty of birds like; the rare shoebill stork, green breasted Pitta, Dwarf Honeyguide, Fine-banded Woodpecker, African Green Broadbill, Grey Cuckoo-shrike, Shelly’s Greenbul, Yellow-streaked Greenbul Red-throated Alethe, Archer’s Robin-Chat and White-bellied Robin-Chat, African Wood Owl, Rwenzori Nightjar, Bar-tailed Trogon, Black Bee-eater, Western Green Tinkerbird among others.

The drier months from June to August and December to February are the best for wildlife viewing in East Africa. This is mainly so when it comes to the tropical forest habitat preferred by primates, but it also applies down on the savannah where animals have slight bush to hide in. There’s also abundant sunshine at this time. In the wetter months, there’s the option that rain will amend off roads and wash out your primate tracking adventure.

External Non-residents from most countries can acquire a visa at the migration desk at the entry point, check with your embassy to verify.

You can acquire an East African Visa if you want to visit more than one country or a normal visa online (with guiding information) from these particular links. 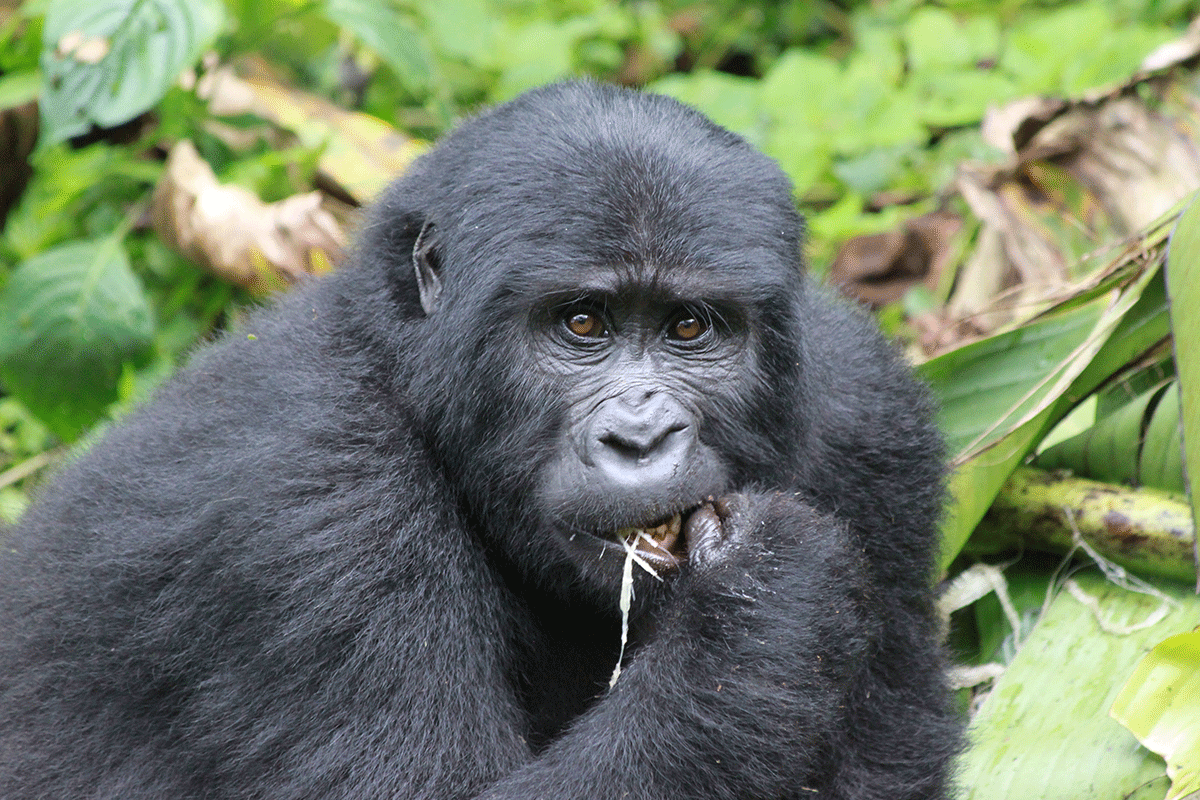 Hiking deep in the Eastern Africa rainforests in search of gorillas.