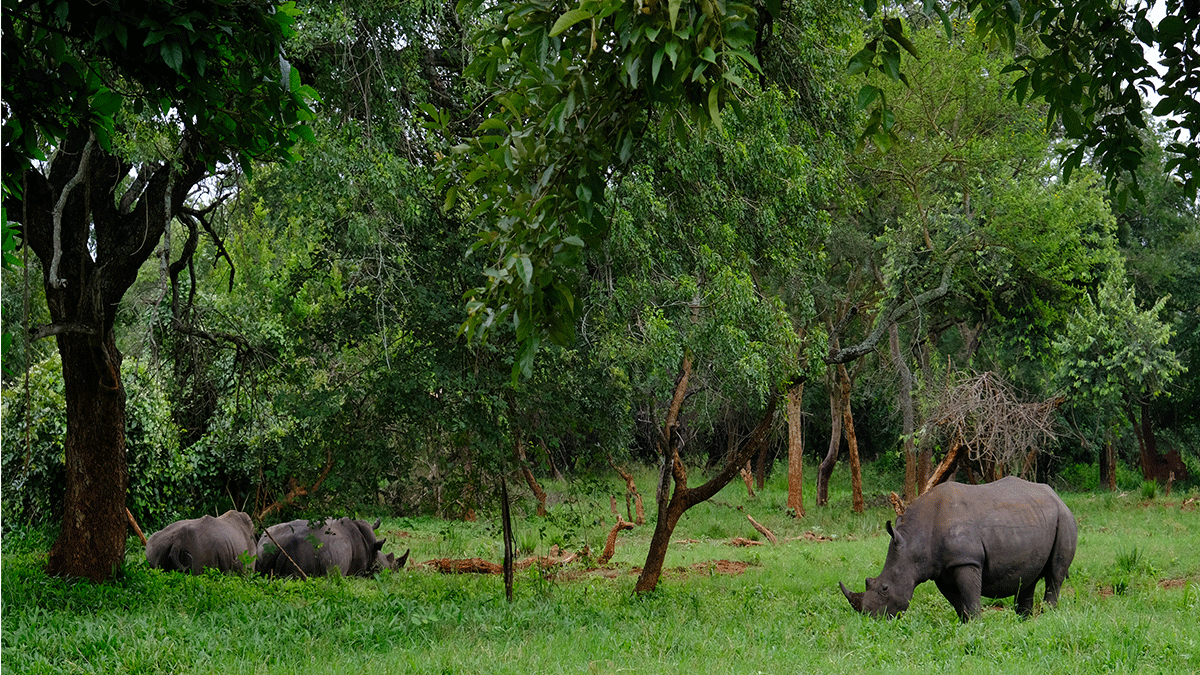 Ziwa Rhino sanctuary is a home for black and white Rhinos located in Nakasongola district off Kampala- Gulu highway, the sanctuary is managed by Uganda wildlife Authority and Rhino Fund Uganda with an aim of protecting and expanding the population of these primates so that they can as well be introduced to other national parks within the country once they breed.

The sanctuary covers an average area of 70 square kilometres (7,000 ha) surrounded by a 2 meters (6.6 ft) electric fence to keep the rhinos in and the intruders out as well as protecting other animals that live within the area.

Ziwa Rhino sanctuary was established in 2005 to reintroduce and build a sustainable rhinoceros population and relocate rhinos back to their original habitat in Uganda’s protected areas for tourists to find them in their natural habitat. Uganda is currently Hosting a total number of at least 40 mammal and reptilian species including monkeys, antelopes, hippopotamuses, crocodiles and numerous bird species.

The sanctuary offers you a chance to track the rhinos on foot. A ranger meets you upon arrival and gives you an introduction to our sanctuary and information about the rhinos here. The tour begins with a board listing each of the rhinos. Depending on where the rhinos are, you will drive to the closest point and approach the rhinos, you will enjoy watching these endangered animals continuously feeding on fresh vegetation without bothering about your presence, While at the sanctuary you may also encounter a range of other wildlife species including Uganda kobs, oribis, bush bucks, water bucks among others and a number of other bird species.

What are the optional activities that can be done at Ziwa Rhino Sanctuary?

There are four bird trails within the sanctuary which cover woodlands, swamp and Savannah, shoebill trek and canoe ride through the swamp not only gives you the opportunity to find the shoebill, but also to see the beautiful Ugandan sunrise over Lugogo Swamp.

Tracking rhinos takes about one to two hours, depending on the location of the rhinos and is done on foot and less demanding compared to other wildlife activities in Uganda like Gorilla tracking experience.

Accommodation in and around the Sanctuary.

There has been proper arrangement upon accommodation within the park where campsites, Lodges and hotels have been setup with both international and local cuisines being served including the famous Rolex. Other facilities include a well-stocked bar, swimming pool and electricity (available 24/7) within the vicinity.

What is the best time to visit Ziwa Rhino Sanctuary?

The best time of the year to track rhinos in Uganda is the dry season that is normally between the months of June to August and December to February. This is because the grass in the Ziwa Rhino Sanctuary is not very tall in that season making it easy to have a clear view of the rhinos and take clearer pictures. The best time of the day to track the Rhinos is from 8:00 am to 10:00 am or late evening at 4:00 pm to 6:00 pm because Rhinos are at their most active early in the morning and late in the afternoon. The tracking can however take place any time of the day and any time of the year.

What is the cost for Rhino trekking at Ziwa Rhino Sanctuary?

What is the best time to visit Masai Mara?

Travel Information in Uganda and Rwanda