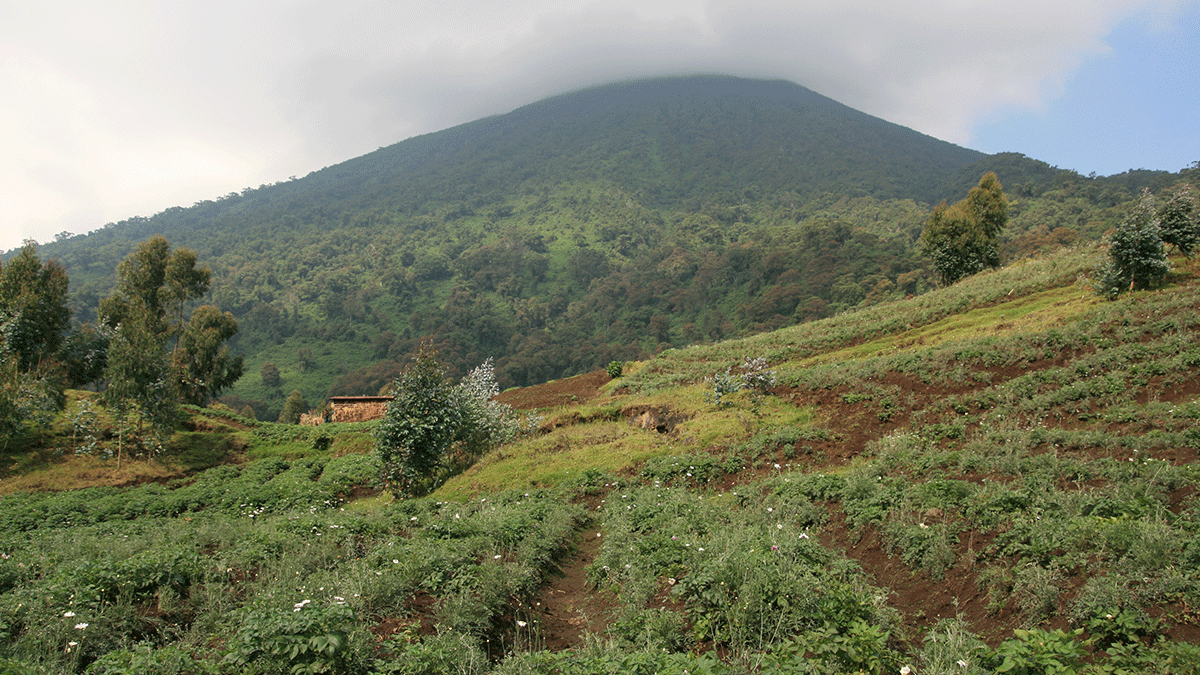 Volcanoes National Park is located in the northern province of Rwanda in the Musanze district. Its bordered by Mgahinga Gorilla National Park in Uganda and Virunga National Park in the Democratic Republic of Congo. Volcanoes National Park was established in 1925 with the purpose of protecting Mountain Gorillas, it is the oldest national park in Africa. This park covers an area of 160 km squared, it has both bamboo and afro montane forest. The park is located headquarters is located in Kinigi village located 12kms outside Musanze town and 2hours drive from Kigali city. Volcanoes national park has a number of attractions including Mountain gorilla tracking which is the highlight of all the activities in Rwanda. This park is home to more than 11 habituated gorilla families that are visited by tourists every day. The park also has the rare golden monkeys which live in the foothills of the volcanoes in the bamboo forest zone, five of the eight volcanoes of the Virunga’s are part of volcanoes national park, they include Karisimbi, Bisoke, Gahinga, Muhabura, and Sabyinyo. Other attractions include; hiking to the famous American primatologist Dian Fossey grave, Birding, Cultural tours, nature walks among other activities and attractions.

Volcanoes national park is rated as the number one tourist attraction in and these are some of the attractions in the park.

Five of the eight volcanoes of the Virunga are found in volcanoes national park, they include Bisoke, Karisimbi, Muhabura, Gahinga, and Sabyinyo.  A 1-day hike to the top of the 3700 meters Mount Bisoke will reward you with panoramic views of the villages neighboring the park as well as a relaxed and cool breeze on the crater lake on top of the volcano. You can as well opt for the 2 days hike of the highest mountain in the Virunga region and fifth highest mountain in Africa mount Karisimbi. This hike involves an overnight sleep on the mountain before you get to the top. The mountain has an elevation of 4507 meters.

Dian Fossey was an American zoologist, primatologist, and conservationist who arrived in Rwanda in 1966. She established a research Centre called Karisoke research center between Mount Karisimbi and Mount Bisoke, this is where she spends almost two decades doing research on mountain gorillas. She was killed in 1985 by unknown people. A hike to her grave will allow you to pay last respects to the great conservationist whose legacy will never be forgotten as far as the protection of mountain gorillas Is concerned. Along the hike, you will also be able to see some mammals such as Buffalos, Elephants, different bird species, plants, and if you are lucky to meet a family of gorillas. You will also be able to see the grave of Dian Fossey Most loved Gorilla grave called Digit next to Fossey’s Grave.

This is an initiative that was started in 2004 by former poachers. Enjoy a variety of activities at the cultural village including; Intore cultural dance participate in the  preparation and cooking of local food, visit the local medicine man and see how he mixes the local herbs to cure diseases,  you can also participate in making local banana juice and beer, Participate in a local traditional marriage ceremony, you can be enthroned king and queen of the day, participate in the bow and arrow shooting among other activities

A visit to the twin lake of Burera and Ruhondo will reward you with the scenic views of the volcanoes. panoramic views of the hilly terraced agriculture fields. You will also see local fishermen paddle their canoes as they are fishing. The best view of the twin lakes is at Volcanoes lodge.

The Musanze caves are two km long and have 31 entrances.   Experienced guides will take you around the caves while telling you about their formations, myth, and stories about ancient Rwanda among other stories. The caves tour takes about 2 hours and it can be done in the afternoon after your gorilla tracking.

This is a small forest where the king of Rwanda would come and bathe before being enthroned. the forest became sacred ground to the extent that those who lived locally refused to cut down the trees and do farming.

In conclusion, therefore, Volcanoes national park has a variety of activities to do and is Rwanda’s top tourist destination, contact Safari Vacations & Travel Services for all your inquiries about Activities and attractions in Volcanoes National Park Rwanda.