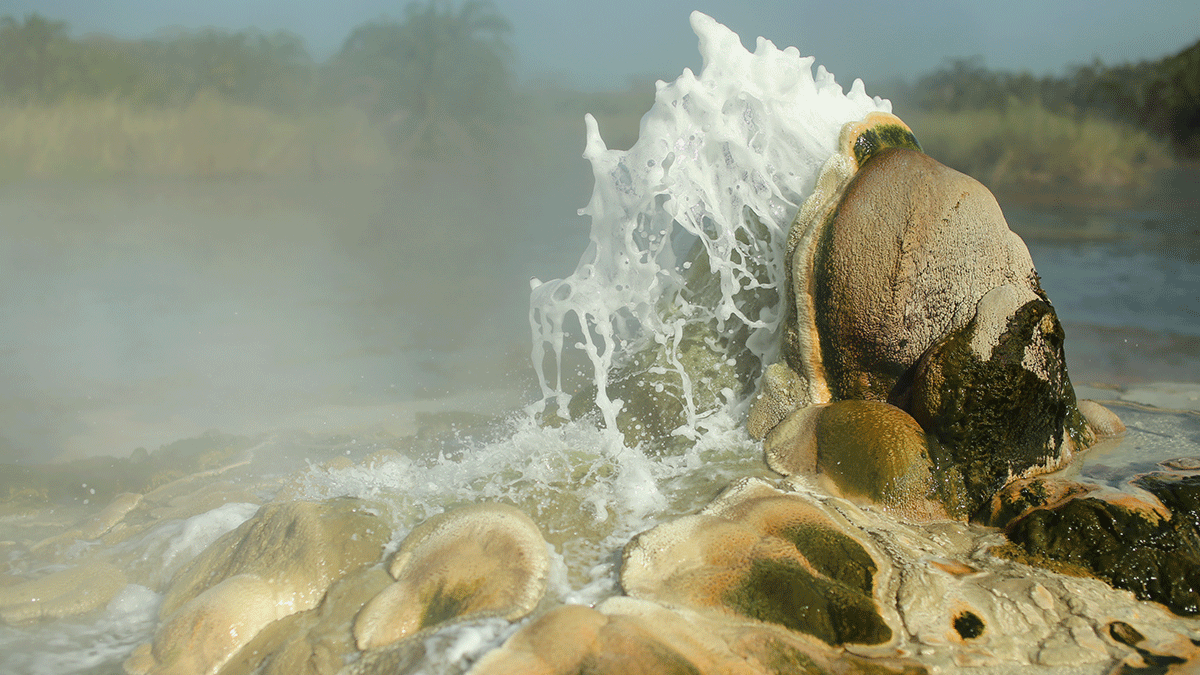 There a lot of attractions in Uganda which as well include Sempaya hot springs found in the west in the foothills of Rwenzori Mountains in Bundibugyo district. Semuliki is dominated by the easternmost extension of the Ituri Forest of the Congo Basin. The springs in this area boil to about 103 degrees celicious from underground geographical forces through the rocks.

Sempaya hot springs comprise of two distinct attractions which are the male and female hot springs. The female hot spring is the most active and most visited by visitors since there several activities which can be done here whereby the boiling water with bubbles has the capacity to boil several meals like eggs, bananas, Irish potatoes for immediate consumption and thus visitors are allowed to move with anything they would like to prepare when you reach this point, it is as well believed by the locals that women who are barren offer sacrifice to the spring for a gift childhood and safe delivery upon child delivery .

The male hot spring however also gives a great experience though its boiling point is different from the female one whereby along the trail to the spring you can be able to encounter other primate species like the baboon, grey checked Mangabeys, black and white Colobus monkey, central African red Colobus, blue monkey, red tailed monkey which is different from the female hot spring.

The Semuliki Valley has much to offer to the visitors which include a scenic drive around which brings you closer to the marvelous beauty of the Park’s surrounding.

The forest is remarkably rich with 53 mammals of which 27 are large mammals. 11 species are endemic to the park. The dominant mammal species include forest buffaloes, leopards, hippos, Mona monkeys, water chevrotains, bush babies, civets, elephants, and the pygmy flying squirrel and as well lions and leopards can be found here

A visit to the Bambuti pygmies who are quite similar to the Batwa community who live around Bwindi Impenetrable Forest and Mgahinga Gorilla Park but rather smaller in population to the Batwa is another thrilling activity. This community have lived in the forests for thousands of year but were evicted from their ancient forests in order to conserve the forest and limit extinction of primates from poaching activities of the people.

How to get to Sempaya hot springs

There two different routes which can connect you Semuliki valley national park whereby you can either take a shorter route from Kampala to Fort portal and then Semuliki national park which is 180km driven for about 4-5 hours and then another route takes you from Kampala-Fort Portal via Masaka, Mbarara and Kasese which is about 465km (7-8 hours) though it offers a more adventurous experience even before reaching Semuliki National park as you can have a stop to Lake Mburo National Park, Kyambura Wildlife Reserve, Rwenzori Mountains National Park or Queen Elizabeth National Park around Kasese. You can also take scheduled or chartered flight from Entebbe to Semuliki wildlife reserve

Contact us to add a visit to Sempaya hot springs on your Ugandan safari and a visit to other surrounding parts of the park like a visit to the caves and crater lakes in Fort Portal among others.