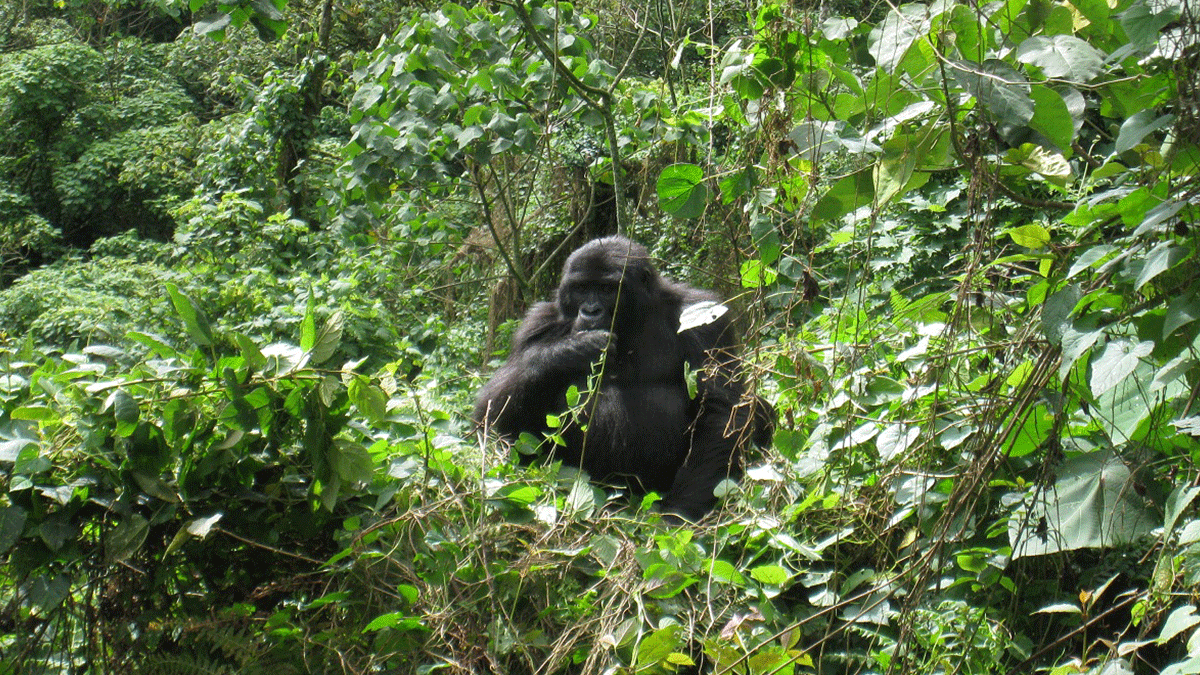 
Rushaga sector in Bwindi is located in the southern part of Uganda and in the southern hemisphere of Bwindi Impenetrable National Park. It can be connected from Kigali via Cyanika border In Kisoro with views of Virunga Volcanoes, Gahinga and Muhabura in Mgahinga. You can as well have views of the lava dammed lake of Lake Mutanda and Lake Bunyonyi the second deepest Crater Lake in east Africa from Lake Tanganyika.

Gorilla habituation takes place in the region of Rushaga sector and Nkuringo in Bwindi Impenetrable National Park where 4 visitors are allowed to each group who are accompanied by researchers and trekkers which gives you a life time experience to interact and learn the process through which Gorillas learn to integrate with mankind.

A group of indigenous natives “Batwa” are a group of local pygmies who lived in the forest with the Rushaga sector in Bwindi who are welcoming and hospitable. Once you’re done with trekking you can undertake this historic experience of understanding how these ancient people lived in the forest as they display their hunting skills, traditional performances and make local cups through bamboo among others, by choosing to participate in this experience you will have supported the local communities indirectly.

Five families have been habituated in Rushaga sector in Bwindi which include Bweza, Busingye, Nsongi, Kahungye, Mishaya. the number of Gorillas in a family as described below are current as of January 2018.  They may and will change during the year. The Key to a successful Gorilla Trek is not the number of Gorillas but the experience that you have.

This is one of the groups in Rushaga sector from Nshongi group. Mishaya emerged as the Alfa silver back who rebelled against his family Nshongi group in 2010. This inspired others groups like Bweza who as well broke away from the family in 2012.

In April 2012 Mishaya started a conflict with a non-habituated Gorilla family which cost him loss of his 2 year old infants and as well got several injuries which almost took his life but was rescued by Mountain Veterinary Project.

In 2014 Mishaya died when his family had expanded to 12 family members and was succeeded by Mwiine as the new Alfa silver back for the family. Succession of Mishaya by Mwiine has been more advantageous as tourists can still have visits to the family in in Rushaga sector and increase the availability of permits to trek in the sector.

In December 2012, Bweza family was formed under the leadership Bweza locally meaning “ more productive” after separating from its family members, Alfa silver back Bweza is made up  of 2silverbaacks, 4 black backs, 3 adult females, 1 sub adult and 2 infants.

It’s a versatile and interesting group where by since separation from Nshongi group due to feuds rangers thought that the family would re-unite back with the former family but the breakup became infinite.

Busingye is one groups Located in Rushaga sector meaning “peace” member of kahungye family which separated from the group in 2012 with 7 members and later increased to 9 family members. Busingye is an aggressive leader which has been observed to creating fights with other groups and found of snatching their female black backs. It is through this dominance that Bushingye managed to increase its family size from 7 to 9 of current.

This is another gorilla family in Bwindi Impenetrable forest National Park from a family of 27 members including 3 silverbacks. Kahungye split from the group reducing it to 13 family members and led by the head silverback Gwigi locally meaning “door”.

The group was opened to visitors in October 2011 with 13 individuals which increased trekking  places for mountain gorillas in Rushaga sector.

This is one of the largest habituated groups in Rushaga sector in Bwindi which was named Nshongi a rivers name in Bwindi Impenetrable Forest Park where the group was named before being habituated.

Nshongi Gorilla family was had been launched in 2009 to the visitors as the largest family to be habituated in Bwindi Impenetrable National Park with 36 family members leaving together in harmony.

Nshongi locally meaning “Omushongi Gwobuki” meaning honey and referred to the deep brownish color of the river Nshongi. It was one of the largest families in the entire habituated group consisting of 36 family members with 3 silverbacks and 7 black backs who lived in harmony without conflicts however with time the number reduced to 26 when some members started breaking of to form this own families like Mishaya in 2010 broke away from the group with 10 family members, 2 years later Bweza also broke away from the family leading to a reduction in the number of visited families in the group.

Visit Rushaga sector in Bwindi by booking with us as we help you secure your availability for permits to the sector and as well uncover the beauty around the Switzerland of Uganda through a tailor made safari to the mist jungle.