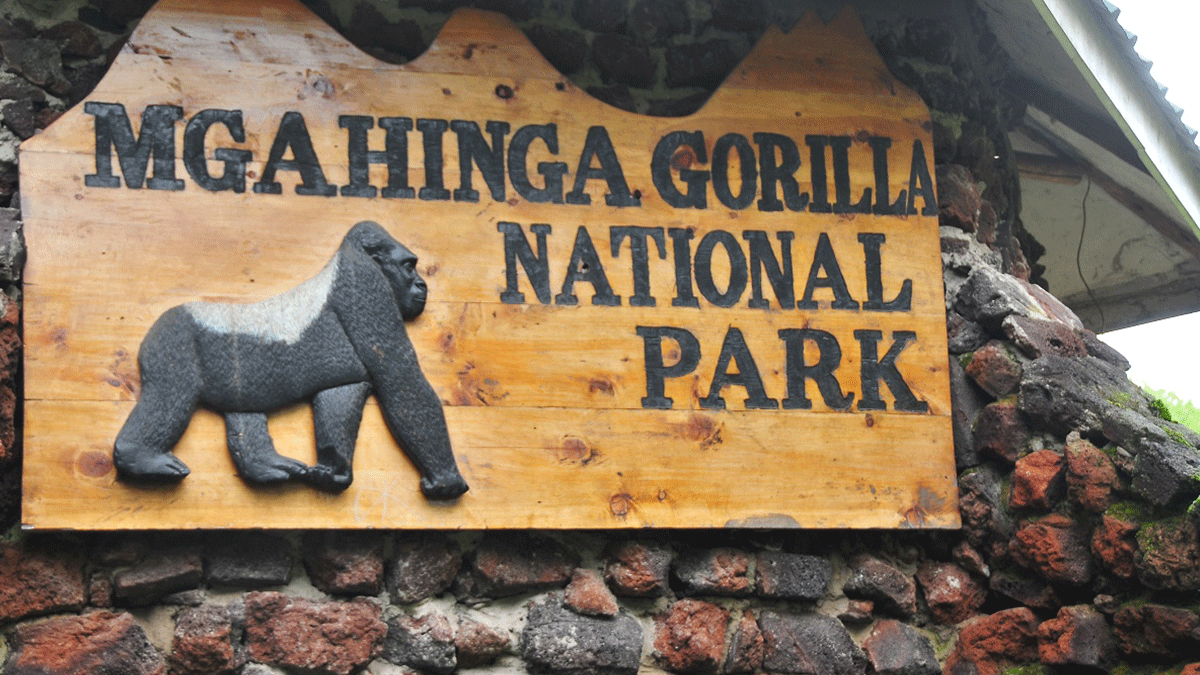 Mgahinga Gorilla National Park, – with one habituated trans-boundary gorilla group, was declared a game sanctuary in 1930 and was finally gazetted as a national park in 1991 to protect the endangered mountain gorilla, it sits between 2,227m and 4,127m above sea level, the highest of the three peaks is Muhabura (4,127m). Muhabura, commonly known as Muhavura means a guide. The locals used to look for its high peak to help them get a sense of direction. The cone shaped Muhabura has a crater on top

The 34sqkm Park is home to 39 mammal species, including the mountain gorilla (gorilla beringei), elephant and buffalo. There is also the rare golden monkey said to be found only in the Virungas and two other forests in Central Africa. There about 100gorillas but one family can be visited that is Nyakagezi Gorilla family

How to get to Mgahinga National Park!
Mgahinga gorilla national park can be accesed through a Flight to Kigali and then crossing via Cyanika border to Mgahinga is the easiest option to visit gorillas in Mgahinga gorilla national park. The 4 hour’s drive through the rolling hills and endless valleys of Kisoro district or via Entebbe international airport for road drive which can take you about 10 hours therefore the close range of Kigali makes it easier to connect to the park than going through Entebbe especially when you’re on a budget of short holiday.

Gorilla trekking in the jungle is accompanied with several rules and regulations which helps you have a safe encounter with the gorillas since they are wild animals and thus your behaviors are paramount on the track and these are some of the don’ts you have to follow to have a wonderful experience.

Mghahinga National Park is where silver meets gold, with an outstanding search for the cousins to human nature, the primates live in groups of about 3o individuals roaming around the Virunga territory in the bamboo sections, the process of tracking them is exceptional since they are small and fast. Once you reach where they nested the previous night and spend as well an hour enjoying their life in the jungle as they feed on bamboo shoots and cross cut around the trees.

Enjoy spectacular stories and ways of the long surviving communities that have evolved in the jungle along with their traditional ways of doing things along the forest. These were fruit gathers, hunters who depend fully on the forest. The Batwa pygmies will display their skills like hunting, hiding in caves, collecting honey, making fire among others where you can as well take part in some of their activities like dancing making your tour more memorable and directly support the communities to improve on their standards of living and empowering their activities. Amidst that 20% of the money collected of permits for tracking is returned to develop the communities and their projects.

Mgahinga national park occupies the Virunga volcanoes mountain conservation area, The three volcanoes are Mt Muhabura, which is the highest and most strenuous at 4,127 meters above the sea level, Mt sabyinyo translated as “old man’s teeth” standing at an elevation of 3,645meters above the seal level. The third volcano is Mt Gahinga which means “a small pile of stones” standing two at an elevation of 3,474 meters above the sea level and is the most hiked being less strenuous which take roughly 5-6 hours to and from the summit. Before the activity is done you’re briefed on the precautions for the journey and where there is difficulty in the hike especially at the peak ladders were put along to ease the trail.

Through nature walk in the forest you can be able to have an encounter with some of the rare animals which will have not been on your itinerary like bush pigs, elephants, baboons, monkeys, gorillas and this activity takes five hours where you follow different trails in the jungle escorted by an armed and experienced ranger for your safety and guide to take you for a breath taking experience in the jungle in its natural atmosphere.

The forest is believed to have plenty of bird species which total to 115 species which can be best viewed in the months of April, mid-May, October and November with the best time for photography and relocation of birds to the forest thus it’s within this time that you can best have the best experience of birding amidst gorilla trekking: encounter some of the wild birds like White necked raven, Pain-tailed whydah, grey capped warbler, AlpineDusky crimson wing, Olive pigeon among others. However the activity is good for birding all year and birders can have a decent birding experience.