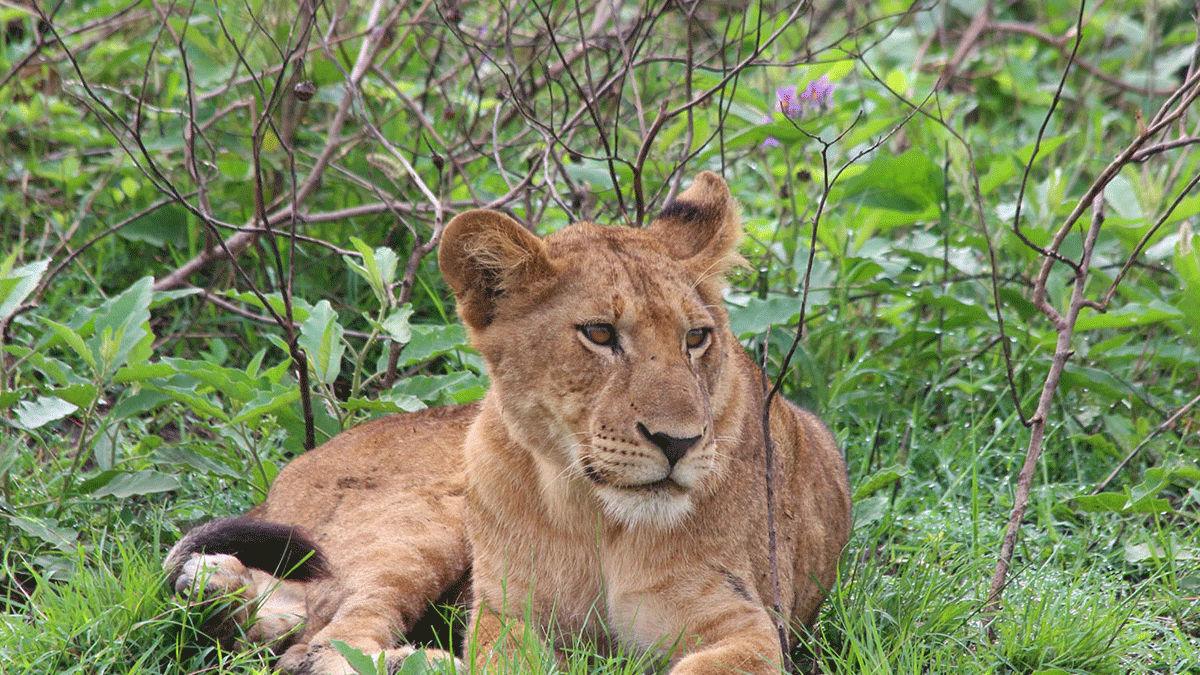 WHERE TO SEE LIONS IN UGANDA?

Lions in Uganda! Wildlife safaris in Uganda are key description of the nick name of the country which is termed as the “Pearl of Africa”  “Kings of the jungle, In Uganda lions are mainly found in the three largest Savannah parks: Murchison Falls National Park (MFNP), Kidepo Valley National Park (KVNP) and Queen Elizabeth National Park (QENP). In QENP, the Ishasha lions are known for their unique behavior of climbing trees and have been branded the “Ishasha tree-climbing lions”

Apparently in Uganda Lions, after mountain gorillas, are the most sought-after species by tourists visiting Uganda given the fact that their population in the country is as well termed among the “endangered species” due to depletion cases of poaching however strict conservation measures have been adopted to ensure the rise in the population of these wildlife animals to contribute to the existing population of 600 wild cats distributed in four national parks and reserves.

What are the best places to see lions in Uganda?

The beauty of the female lioness is an amazing encounter on a game drive. Murchison Falls national park offers you a unique experience amidst other places in Uganda where you can see these primates at the roof of your safari game drive vehicles. A guided game drive exposes you to spot the big cats in the park which are estimated to a population of over 120 dispersed in different zones in the park amidst other wildlife species in the park. With the help of our experienced guides, they will take you through different trails where they hope to trace and meet the lions since at times they tend to relax in shrubs making it had to trace see them unlike tree climbing lions

Queen Elizabeth National Park occupies an estimated 1,978 square kilometres and extends from Lake George in the north-east to Lake Edward in the south-west and includes the Kazinga Channel connecting the two lakes, furthermore the park includes the Maramagambo Forest and borders the Kigezi Game Reserve, the Kyambura Game Reserve, and the Kibale National Park in Uganda, and the Virunga National Park in the Democratic Republic of the Congo, it is one of the most visited park in Uganda and host several wildlife species for game viewing with over 95 mammal species and over 500 bird species.

By use of our top-up roof safari vehicles you get to enjoy wildlife safari game drives taking you through different trails in the park to see the endangered big Cats, you can encounter a pride of lions closer to the road

You can as well enjoy a guided tour with a researcher who use radio tracking to locate where the lions are, this is a separate arrangement that can be organized in Queen Elizabeth national park as well and it requires separate costing on your safari to enjoy the experience. Unlike seeing lions in the thick shrubs during your safari game drive, the chances of seeing lions on tracking experience are high since there is a team that monitors them with radio collars to trace their movement making it easy to locate them in the park. The cost of the permit for this experience is at $60, excluding park entrance fees.

This a unique encounter which you can find in Uganda particularly Queen Elizabeth National Park, lions usually prefer to congregate beneath trees rather than haul themselves up into the branches. The Ishasha sector of park which lies in the south is the home for tree climbing lions where on your game drive you can be able to sport lions resting in the huge fig trees after a big hunt and observe the surrounding and spot the next potential prey.

Kidepo valley national park is one of Uganda’s remote national park found in the north close to border of Kenya and South Sudan. The park is a true definition of Africa wilderness due to its landscape which offers you stunning views coupled with movement of animals across the park which we can compare to that of Masai Mara in Kenya. Seeing lions in this park is one of the attractions in the park and on every visitor’s wish list along with cheetahs and other predators. Be able to encounter part of the 132 individual lions roaming around the park on your game drive. The high level of increase of these predators as well makes the park a more attractive destination to see these wild cats than any other park in the country where they are found.

Entebbe Zoo is located in near Lake Victoria a few Kilometers from Entebbe international airport  but as well commonly known as Uganda Wildlife Education Center, the area is an educational Centre that is combined with leisure, the zoo host several animal including wild cats which are a must see once you choose to visit the area for your tour to Uganda. Here you will have a comprehensive interaction and briefing on the different species of lions and their origin along with other attractions in the area including reptiles and birds.

This is another wildlife reserve found in Karamoja region northeast of the country with close proximity to Kidepo valley national park where you can encounter lions in this protected area. You will as well get to meet other wildlife primates like cheetahs, olive baboons, vervet monkeys, atelopes and the common Oribi and bird species which will occupy you with marvelous melodies.

Toro-Semuliki wildlife reserve is found in western Uganda in Kabarole District. The area is one of Uganda’s protected areas and a conservation area for Lions which can best be seen during your night game drive. The reserve is as well-known for the shoebill that lives in the marshy areas of Lake Albert amidst other bird species, enjoy this wildlife reserve with close encounter to other primates like leopards, white tailed mongoose, bush babe, Elephants, Buffaloes, Uganda Kobs among others.

Plan for a Ugandan safari with Safari Vacations & Travel Services for wildlife experience in any of our preferred destination on where to see lions along with other breathtaking moments like mountain gorilla trekking, chimpanzee trekking, cultural experience, mountain climbing, white water rafting, bungee jumping, visiting museums, bird watching and other activities around different parks in the country.