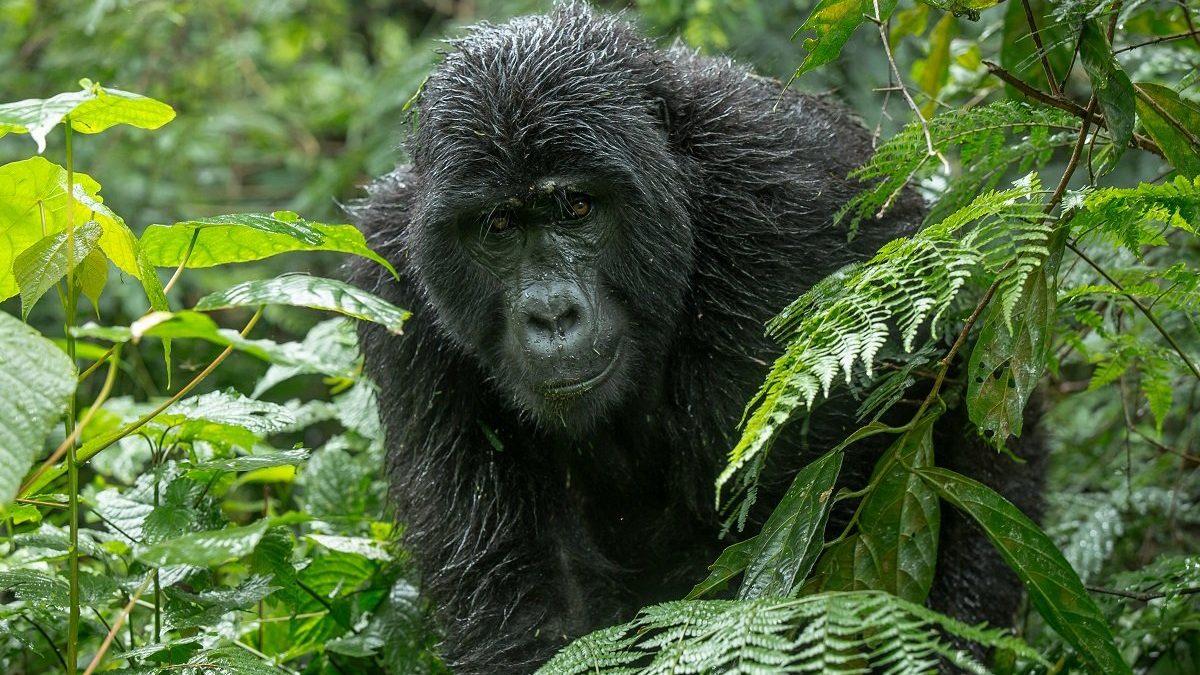 One – Mountain gorillas are only found in three countries

As we already mentioned earlier, you can only see the gorillas in Uganda, Rwanda, and the Democratic Republic of Congo. Mountain gorillas live in more extreme conditions and environments than their lowland cousins. They live in high altitudes that reach 4,500 meters. Mountain Gorilla tracking is an Interesting fact about mountain gorillas’ exciting activity that takes you to some of Africa’s densest forests to find these majestic apes.

The activity starts early in the morning with a briefing of participants. After the briefing, the participants are then led by Rangers and guided through thick vegetation, plains, streams, and valleys in search of a particular gorilla group. The activity can take between 30 minutes to 5 hours depending on the location of a group on a particular day. Once the group is located, visitors can only be with them for one hour. This is to avoid the spread of human diseases and agitating the primates. One hour is a good time to observe the family and take some photos. By the time the one hour is done, you would have noticed that they indeed behave like we humans.

If you check information about mountain gorillas,  you will learn that mountain gorillas are the most threatened of the three gorilla subspecies. However, it is important to note that although there are currently 1000 individuals, their numbers are increasing each year. There are about 200,000 Western Lowland gorillas in the wild while the lowland gorillas are less than 7,000. These statistics mount sound good news but their numbers are decreasing at an alarming rate.

The greatest threat to mountain gorillas comes from man and his activities. Humans live close to areas where mountain gorillas call home and because of population explosions, they are forced to clear forests to create more space for settlements leaving mountain gorillas to live in forest islands. These forest fascinating facts about mountain gorillas islands make it difficult for the gorillas to transfer their genes to other gorilla groups. In some countries, mountain gorilla body parts are sought after by traditional witch doctors for producing charms. Mountain gorillas are also hunted for their meat, as trophies and to be sold to animal traffickers. Some local hunters will kill a silverback gorilla to show strength without considering the impact on an entire gorilla group. The same hunters kill mountain gorillas by accident when they get caught in snares designed for other animals. Continued wars and civil unrest in the Democratic Republic of Congo have made gorilla conservation work very challenging – no wonder DR Congo has the smallest number of mountain gorillas despite having the oldest national park in Africa.

The discovery of oil in the Virunga National Park is now being seen as a future threat to the existence of mountain gorillas in Congo. Oil wells would not only destroy forests but bring humans close to the gorillas exposing them to diseases like pneumonia, Ebola, and flu. Gorillas are less immune to human diseases. It is for this reason that those who are sick aren’t allowed to take part in gorilla trekking.

Three  – Mountain gorillas are highly intelligent and similar to humans

Even though they walk on four legs and have fur, mountain gorillas are our relatives. They share 98% of our DNA and can use several tools in different ways including flushing out termites. Like humans, mountain gorillas have a unique identifier. Each mountain gorilla has a unique pattern on its nose. Mountain gorillas live in a family group with a male, other males, females, juveniles, and infants just like it is with humans. Observing the interaction between members in a gorilla group will remind you of your own selves.

As already noted, mountain gorillas live in social groups which can range from between two to forty individuals. Most of the females and males born in the group eventually leave to form their own group or join others (females). Mountain gorillas are led by a dominant silverback who dictates all group activities. He decides on when and where to go next. A silverback is ten times stronger than an adult human. They will spend their morning and evening feeding. Midday is for resting, taking a nap, playing, and grooming. Once it gets late, they start to make their night nests using twigs and leaves. The silverback will protect the group to death if attacked by humans, leopards, or other silverbacks. However, this extreme measure is only a last resort after trying to intimidate or frighten away the intruder.

Although each group has a dominant silverback, 40% of the groups have other silverbacks. When this occurs, a hierarchy is established among the silverbacks with the dominant male the absolute leader.  Male gorillas do not always leave the group like the females. They will stay with the group and remain subordinate to the alpha male (who is often their father or brother) hoping to inherit power. A few will decide to leave the family and stay on their own or attempt to attract females away from larger groups to start their own families. In a situation where there are several males in a group, all of them share the responsibility of protecting the group. The dominant silverback sires most of the offspring but the subordinates will have a few of their own.

There is a general belief that primates prefer to stay on top of trees. While this may be true for most primates, the same cannot be said of mountain gorillas. Adult mountain gorillas are too heavy to climb trees all the time. They will only do so if they need to collect ripe fruits from a tree that can support their weight. Even so, they do this rarely. It is the youngsters that climb short sturdy trees more frequently. This is because they are not as heavy as the adults.

One common stereotype (from King Kong movies) about gorillas, in general, is that they are violent creatures that will harm one if given a chance to. This is far from the truth because gorillas are one of the gentlest and most peaceful creatures you will ever encounter. They live in calm and organized groups and rarely attack unless threatened. They are very different from chimpanzees which are very aggressive and will hunt other smaller primates or antelopes for meat if a chance presents itself.  Gorilla charging is very rare. Even when agitated, gorillas will first attempt to communicate their displeasure to an intruder.

A mountain gorilla’s diet consists of main leaves, flowers, tree bark, stems, roots, and ants. A silverback can eat 18 kilograms of vegetation in a day to support his massive body. Because of the cold conditions they live in, they have plenty to eat but with a notable lack of variety like their lowland cousins.  Because they feed so much on leaves and tree barks, their diet is high in tannin. These are the same ingredients/compounds that make our coffee and tea bitter. It is for this reason that mountain gorillas have stained teeth compared to lowland gorillas.

A female mountain gorilla reaches maturity at around 9 years of age. Once they are able to give birth, a female will leave the mother’s group to find a suitor in another group or with a lone silverback. A female is pregnant for 9 months and will normally give back to one infant at a time. Twins are a rare occurrence that is celebrated by both tourists and conservationists alike.  An infant weighs about 1.8 kilograms at birth and will begin riding on the mother’s back as a form of transportation once they reach four months of age.

Ten – Mountain gorilla safaris are expensive but worth every penny

A gorilla permit costs $1500 in Rwanda, $600 in Uganda, and $400 in the Democratic Republic of Congo. If you are interested in the gorilla habituation experience, you can do this in Bwindi impenetrable forest at a cost of $1500 per permit. The gorilla habituation experience allows you more time (four hours) with the gorillas than in normal gorilla trekking. A single mountain gorilla can generate over $2.7 million through tourism in its lifetime. Because of the monetary value of mountain gorillas, it has been easy to protect them. The governments of Uganda, Rwanda, and the Democratic Republic of Congo are willing to go to great lengths to protect them. The countries do not need to be pushed by conservationists when it comes to protecting the great primates like it is with other wildlife (elephants, Rhinos, etc.).

The permits are issued by the relevant wildlife authorities in the country. It is important to note that the price of a gorilla permit does not include accommodation, transport, flight, and other expenses. You have to plan for this separately. The cost of gorilla trekking can reach $5000 dollars if you are a luxury traveler. For the ultimate wildlife experience, it is recommended that you combine gorilla trekking with viewing other primates (chimpanzees or golden monkeys), cultural experience, and a general wildlife safari in any of the African countries. Considering that the procedure for acquiring the permits is not straightforward in some of the countries, you can simply book it using your tour operator. What are the chances of seeing mountain gorillas? We have never heard of tourists failing to see the primates. This is because an advanced team of trackers is sent before the sun rises to identify the exact location of the gorillas. They then direct the Rangers to where the group is located.

The reward for spending so much on a safari is being in the presence of a creature that resembles and behaves like humans. It is very rare to find individuals who regret spending time with the primates and most remember the encounter for the rest of their lives.

Get in touch with safari vacations and travel services for updated information about the mountain gorillas in Uganda, Rwanda, and the DRC, we can assist you in booking the gorilla tracking permits in the respective countries, and secure other services like transport, accommodation in time to avoid delays or inconveniences after your arrival for your safari.