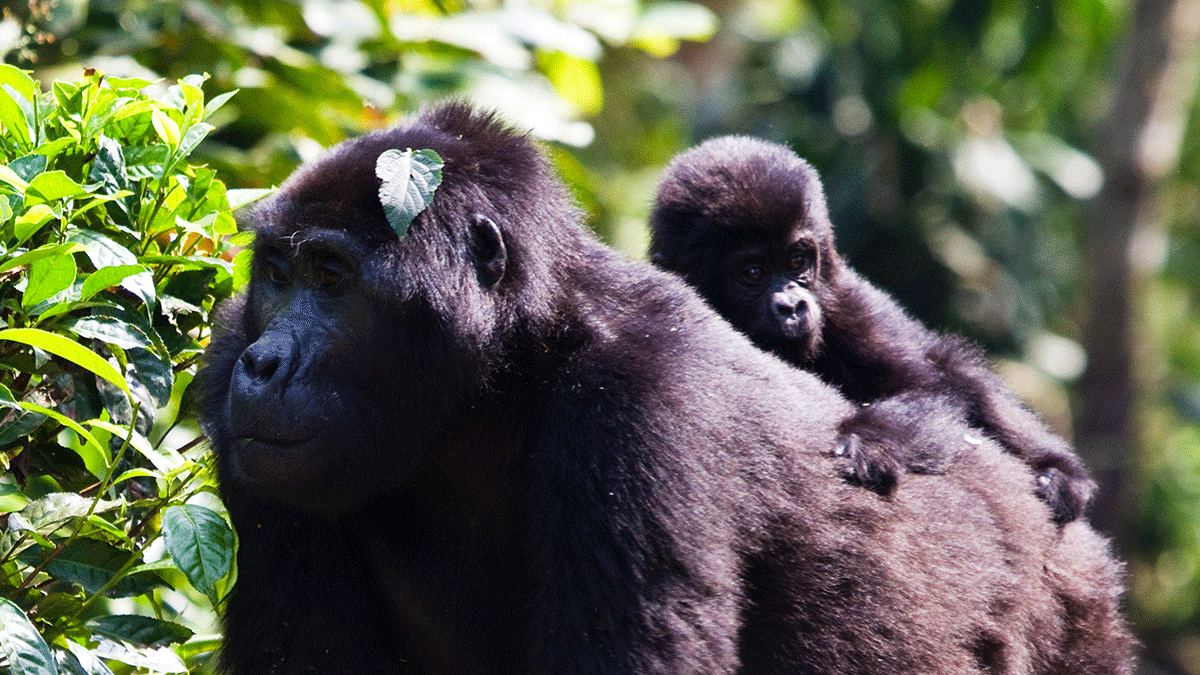 Mountain gorillas are some of the endangered world recorded species on the IUCN Red List with the verge of extinction but great thanks to the countries which inhabit them for the tremendous efforts that have been made to protect them. The world’s total remaining mountain gorillas is estimated to be 880 but Uganda which is a home for these great Apes host half of these remaining giants with a total of 480 Mountain Gorillas occupying the Afro-Montane Forest of Bwindi impenetrable forest National Park in southwestern part of the country at the edge of the western Great Rift Valley neighboring the Democratic Republic of Congo border next to the Virunga National Park..

Gorilla habituation is the process under which wild gorillas are trained to get used to human presence and relate to them in a non-violent way once you encounter them in their habitat. This process takes between 2-3 years where researchers visit the gorilla family on a daily basis until they reach to their goal and thus open the family up for visitors. In Uganda there are several habituated gorilla families in Bwindi which sum up to 16 with two more families that are undergoing habituation process and one more gorilla family in Mgahinga National Park which makes a total of 19 habituated gorilla families in the country.

Gorilla trekking in Uganda is apparently one of the most thrilling activity on every traveler’s package amidst wildlife since chances of having an encounter with the primate’s stand at 95% and having an eye to eye encounter with them is unique and memorable. Gorilla trekking experience offers you one hour experience with the primates in the jungle and for visitors who would like to spend more hours with them the two groups under Gorilla Habituation Experience have a special arrangement where one can visit these groups for habituation experience spending a maximum four hours in each visit.

The following are gorilla families in Bwindi Impenetrable forest national park open for visitors all year round for trekking experience and each of them has its own history, characteristic and offer unique experience along the trek. NOTE: Bwindi gorilla groups are organized according to the location; Buhoma area currently having 4 groups, Ruhija area currently having 4 groups, Nkuringo area group having 2 Gorilla groups (One group for habituation experience only) and Rushaga area having 5 groups (One group for habituation experience only) and Nyakagezi Family in Mgahinga National Park.

Mubare is the oldest habituated gorilla group in Uganda. It was found in the Mubare hills, deep in Bwindi forest, and was fully habituated in 1993.the family apparently has 9 family members led by one Silverback gorilla

Rushegura gorilla family was brought together in 2002, after one of the silverbacks from the Habinyanja group decided to break away. It derived its name from “Ebishegura” – a tree species that was abundant in the home area of the new family with Mwirima as the lead silverback. Apparently the family has got 18 members including one silverback.

This gorilla family has a fascinating story whereby it was normally sighted aroung headquarters and it took only 15 months for visitors to visit it unlike the normal process which takes 2-3 years. Bitukura is a peaceful family including 12 members and 4 silverbacks

The Oruzogo group is the second habituated gorilla family living in the Ruhija area and was habituated for trekking in 2011.The group consists of 23 individuals and is led by Silverback Tibirikwata. It’s one of the most popular families’ playful and energetic juveniles.

The group was opened for visitors and gorilla tracking in 2011 after being habituated. Kahungye Gorilla Family is led by Rumanzi and there are a total of 17 individuals that includes 3 silverbacks, 3 blackbacks, 3 adult females, 3 sub-adult, 3 juveniles and two infants.

This is a new family in Buhoma sector north of Bwindi impenetrable forest national park. Katwe family joins the other three families of Mubare, Habinyanja and Rushegura making a total of habituated gorilla families in Buhoma to four. It comprises of 7 members in the family with one dominant silverback.

The Nkuringo group was named after the Rukiga word for “round hill” and was launched in 2004, currently the family consist of 19 members including 2 silverbacks.

This family split from Nshongi Gorilla family to make up its own family with the supreme silverback known as Mishaya who later died in 2004 and was succeeded by Mwine. The family comprises of 12 family members

Bweza Gorilla group is located in the Rushaga sector with 9 individuals including 1 silverback known as Bweza. Bweza split out from Nshongi family where it started its own group.

Bikyingi group, whose name also spelt as Bikyingi has 15 members including 1 silverback, 5 adult females, 2 semi-adults, 2 juveniles and 5 infants. Bikyingi Gorilla Family is one of the two gorilla families in Bwindi available for

This is yet another gorilla family found in Rushaga sector with 8 family members and dominated by female. The family is led by the dominant silverback Mucunguzi “meaning Savior “named after breaking off from Bweza family.

Kyaguriro Gorilla group is located in Ruhija with 20 individuals who feature a fascinating history which is an attraction of itself, and it’s known as Kyaguriro group A and B, this explains that the group’s habituated in 1995 as a group dedicated to research aimed learning more about the endangered primates, their traits, characters, biology, reproduction and behaviors among by Manx Planc Institute (MPI) for Evolutionary Anthropology

Apart from Bwindi which boasts of numerous gorilla families, Mgahinga National Park has only one gorilla group for trekking. The group is led by Mark, the dominant silverback, who likes traveling and keeps on crossing borders between Uganda, Rwanda and Democratic Republic of Congo. Apparently the group reside in Uganda with a population of 10 gorilla families including three silverbacks living together in the family.

Bwindi has many mountain gorillas some of which are not yet habituated and the nature of conservation has necessitated increase as seen on the birth of new gorilla family members in different families. UWA has got more space available for tourists who intend to do gorilla tracking thus send us your quote and we arrange for you your gorilla trekking permit to any of the above habituated gorilla family in Bwindi.