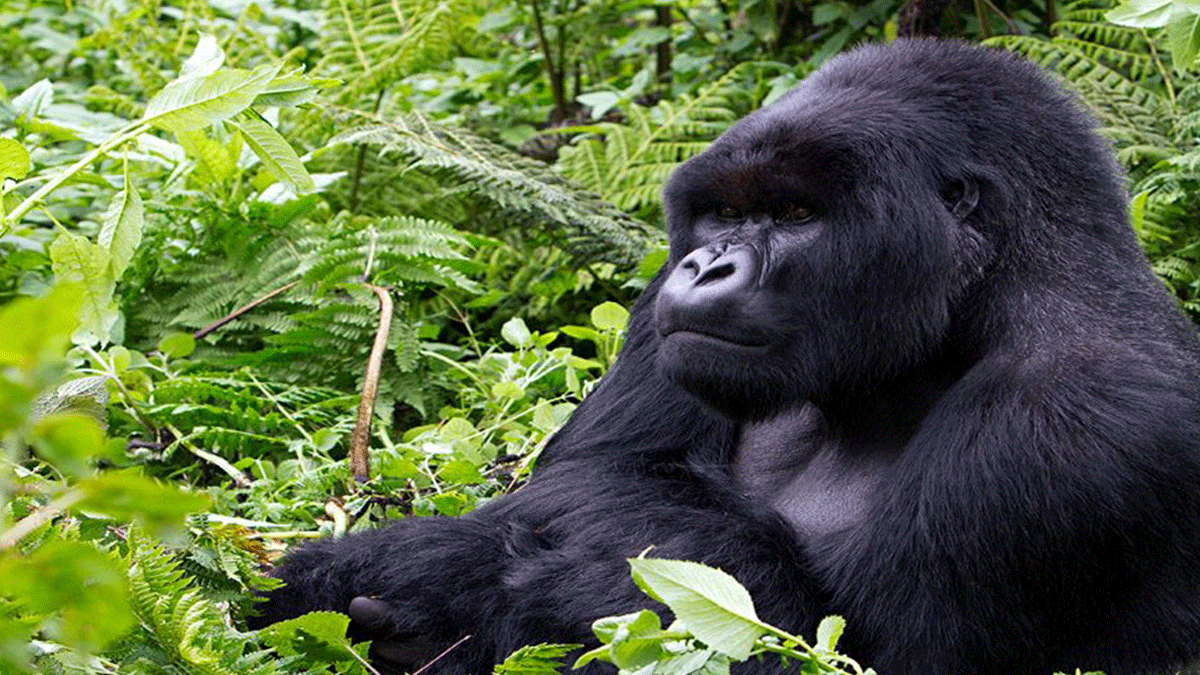 Rwanda is one of the East African countries that has developed its economy through different strategies and through the use of local based man power and resources. There numerous ways that have as well led to development of their economy which include tourism which contributes US$14 billion by 2018 with an increase of 13.8% by 2017 and more so contributes 12.7% of the country’s GDP and more than 100,00 Jobs to the natives.Gorillas in Rwanda therefore contribute a lot to the sector ever since it was termed as luxury gorilla trekking destination with an increase in its permit cost.

The tourism sector in the country hosts a million tourists which has boosted their economy with the main tourist potential being mountain Gorilla tracking. If there is an adventure which wouldn’t disappoint you with high chances of having an encounter with then look no further than Mountain Gorilla trekking.

The gentle Apes which were discovered by the American naturalist Dr. Diana Fossey in the Virunga Ranges who made deep research and discovery about their behaviors and relation to human presence for over 16 years saving the gorillas from extinction and bringing their plight to the attention of the international community which later led to publishing of different articles and later a movie known as “Gorillas in the Mist” which popularized his work has been greatly valued thus many travelers have flogged the country for the adventure.

Gorillas in Rwanda are hiked in Volcanoes National Park, an area which was gazetted in 1925 being the first national park to be created in Africa with the soul aim of protecting gorillas from poachers. The park host over 400 mountain gorillas which is almost half of the world’s remaining mountain gorillas with 10 habituated gorilla families.

Mountain gorillas are indeed endangered species named on the IUCN RED List which need protection thus the 10 habituated gorillas in Rwanda are open to travelers all year round with each gorilla family visited by 8 people per day with an hour experience with the primates in the jungle once met. Here you are allowed to ask questions to the rangers who have studied their behaviors and have all the necessary experience to give you accurate and relevant answers, take plenty of pictures for your memory and record to show your family upon completion of the safari.

Rules and Regulations for safe gorilla tracking
It is important that all gorilla trekking participants familiarize themselves with the following regulations and rules of conduct:

Travelers should be in good physical condition and be physically and mentally prepared to walk long distances over rough terrain if that is where the search for gorillas takes them.

The short wet season is from October to November, while the long wet season stretches from mid-March through to June.

Cost of Gorilla permit in Rwanda

Gorilla tracking in Rwanda has been made luxurious and thus any visitor who loves spending his time in the jungle for gorillas in Rwanda will have to rise a total sum of $1500 per person per trek. The rise of gorilla permit to the country came up with an aim to increase the country’s GDP and as well improving the conservation strategies for the giant apes in the jungle. Therefore purchasing a gorilla permit at that price you not only benefit the country but everyone in the sector who are service providers.

Gorilla permits can either be got through a trusted tour operator where you only have to send in your travel plan: dates, month and year upon when you want to trek and then once the permit is secured a proof of payment will be scanned and sent to you. You can as well make online booking to Rwanda Development Board by sending them an email though the process may take time to get the permit and thus we therefore strongly recommend a trusted local tour operator upon securing and helping you organize well your safari.

Gorilla tracking with safari vacations & travel services not only takes you to gorillas in rwanda but extends beyond to mountain gorilla experience in Uganda in Bwindi Impenetrable Forest National Park and Mgahinga Gorilla National Park and Virunga National Park in D.R.Congo with affordable and incredible packages to best suit your budget