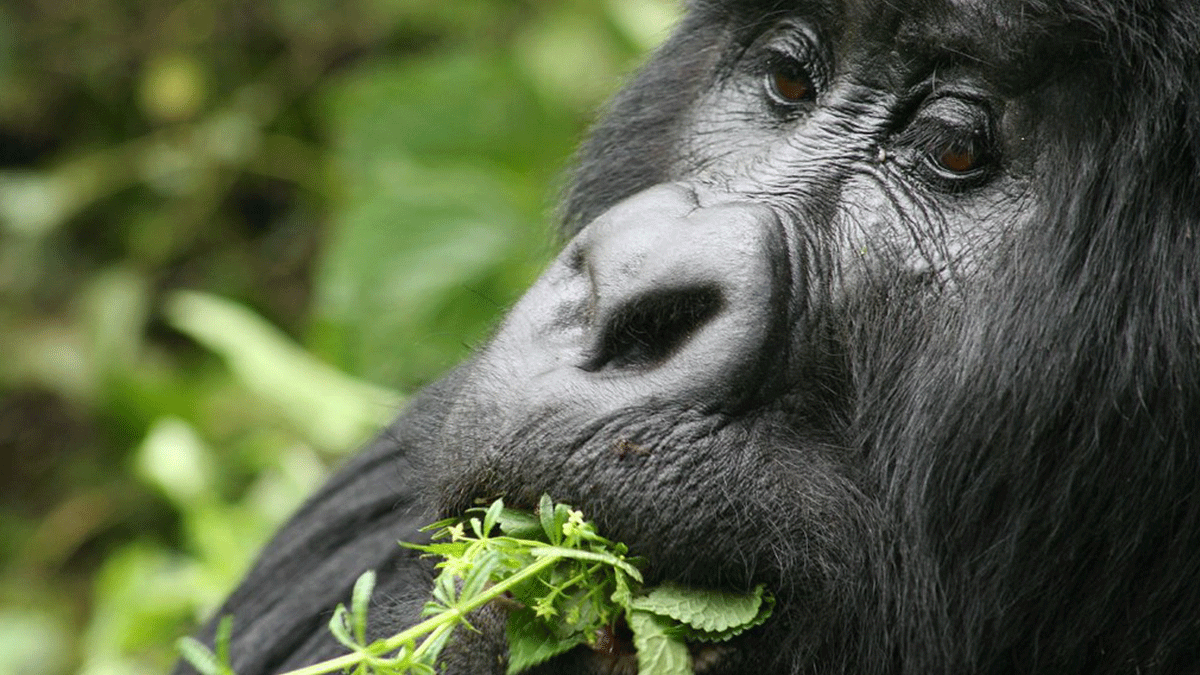 The Congo is not all about gorillas. Congo offers opportunities to hike volcanoes, explore unique cultures, meet unique tribal groups like pygmies and spot all of Africa’s famous animals. A safari in Congo also offers a chance to spot rare species like the Congo peafowl, bongo, okapi, pygmy chimpanzees (bonobos) and much more. Congo is different because it remains untamed, unspoiled, raw and waiting to be discovered. The Democratic Republic of Congo is one of the few countries that still offers tourists a chance to explore the Africa that you read about in old hunting or safari books.

However on the other hand, despite having vast natural resources and incredible biodiversity, the Congo has been plagued with conflicts for a long time. Most of the national parks in Congo receive few tourists and remain undiscovered. The Eastern part of the country is particularly unstable and this is evidenced by the presence of one of the largest UN Peace keeping missions on earth. Much as the world has been denied a chance to fully discover this naturally beautiful country, there is light at the end of the tunnel.

In today’s blog safari vacations and travel services focusses on the national parks in Congo. If you are interested in similar articles, you can read about the things to do in the Democratic Republic of Congo or tourism activities in Kinshasa.

National Park in DRC Congo is a UNESCO World heritage for its incredible biodiversity and hosting one of the remaining populations of mountain gorillas. Having been established in 1922, Virunga is the oldest national park in Africa. It was at one time the largest national park before it was split to from the Volcanoes National Park in Rwanda and Mgahinga National Park in Uganda. Virunga is located in the Eastern part of the county close to the border with Rwanda and Uganda. The park is home to three volcanoes – Mikeno, Nyamuragira and Nyiragongo. Because of the ongoing conflicts in Eastern Congo, Virunga has been declared a site in danger. Apart from mountain gorillas, Virunga is home to the rare okapi, chimpanzees, forest elephants, African buffaloes, Ugandan Kobs, hippos, giant forest hogs, waterbucks, warthogs, topi, duikers, lions, colobus monkeys and blue monkeys. There are 706 species of birds, 65 of amphibians and 109 of reptiles.

Congo national parksThe main activities in the park are mountain gorilla trekking, chimpanzee trekking, nature walks and hiking the Nyiragongo volcano. Virunga National Park consists of savannah grasslands, swamps, rain-forests, steppes, 3 volcanoes and several water bodies. The greatest threat to Virunga National Park is poaching, encroachment on park land and rebel groups operating in some parts of the park. Militias operating in the park have carried out several attacks on park rangers which has negatively affected tourism. The discovery of crude within and outside the park may turn out to be the greatest of all the threats in the future.

Maiko national park covers an area of 10,885 square kilometers and is found in one of the remotest areas of the country. Maiko started as a hunting reserve before it was gazetted in 1949 by the Belgian colonial government. The park is an excellent place to go to if one is interested in spotting Congo’s unique animals including the Congo peafowl, aquatic genet, okapi, African forest elephants, chimpanzees and the Eastern lowland gorilla. Maiko National Park is also one of the best places to learn about chimpanzee conservation.

This is one of the many UNESCO World heritage sites in the Democratic Republic of Congo. The park is found in the south eastern part of the country – near the town of Bukavu and the banks of Lake Kivu. The Congo game parkspark was established in 1970 by Adrien Deschryver, a Belgium conservationists and photographer. Kahuzi-Biega covers an area of roughly 6000 square kilometers with much of it marked by lowland rain-forest, bamboo forests, swamps, bogs and marshland. The park derives its name from two mountains – Kahuzi and Biega. Kahuzi Biega National Park is home to Eastern Lowland Gorillas, eastern chimpanzee, bush buffalo, forest elephants, owl-faced monkeys, bongos, otters, bush squirrels, aquatic civet and galagos just to mention a few. The Eastern Lowland Gorilla, also known as the Graeurs Gorilla is the largest of the gorilla sub-species. Eastern Lowland Gorilla trekking is the most popular activity. While on a gorilla trekking mission, tourists can also choose to include birdwatching, mountain climbing and a tour of the city of Bukavu.

Covering an area of about 36,000 sq. km., Salonga is the biggest forest national park in Africa and lies along the Congo river basin – between Kisangani and Kinshasa. The park was established in 1956 but increased in size in 1970. By 1984, Salonga National Park was designated as a UNESCO World Heritage Top game parks in CongoSite. The park is made up of wetlands, woodlands, grasslands and dense rainforests. The main wildlife species to be found in the park rare Salonga monkey, bonobos, Angolan slender mongoose, African golden cats, leopards, Congo Peacocks, African slender-snouted crocodiles, long-tailed pangolin and the elusive Okapi just to mention a few. Salonga is one of the best birding spots in the Democratic Republic of Congo. Birders can expect to see cattle regrets, black storks, yellow billed stork and others that are endemic to the area. Like many of the national parks in Congo, the growth of tourism has been hampered by insecurity and inaccessibility due to poor roads. The park can only be accessed through river Lokoro.

Lomani National Park lies in the middle of river Lomami – found in the provinces of Maniema and Tshopo. It was established in 1992 and formally opened in 2016. The park now covers an area of 8,879 Best game parks in Congo square kilometers consisting of several hills on the western side and rainforest/savannah to the south. The park is home to African forest elephants, bonobos, okapi, Congo peacocks, grey parrots, salonga monkeys, lesula monkeys (only found in the park), the rare dryas monkey and other smaller primates. The inner parts of Lomami National Park and its vast forests have a lot to be discovered. Hunting for bush meat and elephant tusks is the greatest threat to the park. Whereas the inner parts of the park remain untouched, larger animals living on the outer fringes of the forest have been targeted by poachers.

This is one of the largest national parks in the Democratic Republic of Congo. Garamba was established in 1938 and is now a UNESO World Heritage site. It is located in the eastern part of the country (at the border with South Sudan) and covers an area of about 5,200 square kilometers. Much of the park contains woodlands, extensive savannah grasslands, rivers and forests. Garamba is home to lions, leopards, forest hogs, African elephants, forest elephants, buffaloes, the endemic Congolese giraffes, spotted hyenas, chimpanzees, hippos and several species of antelopes. The Garamba National park may still be the only one hosting wild northern white rhinos.

The park is managed by African Parks which also manages other national parks in Africa including Nyungwe in Rwanda. Rangers from the Congolese government and the Institut Congolais pour la Conservation de la Nature (ICCN) protect the park but poachers, refugees and militias still find their way Best national parks in Congointo the park. Garamba lost much of its wildlife during the various Congo and Sudan wars of the 1980’s and 90’s but many international conservation Agencies have teamed up to save this biologically diverse national park. The World Wildlife Fund, International Union for Conservation of Nature and Frankfurt Zoological Society are just some of the many organizations that have helped rehabilitate the park. A new threat to tourism in the park is the presence of the Kony Rebels. After being flushed out of Uganda and South Sudan, they have taken refuge in parts of the park.

Situated in the south eastern part of the Democratic Republic of Congo – next to Kundelungu National Park and in the Lualaba Province. Upemba National Park was established in 1939 National Parks in the Democratic Republic of Congo and is hence one of the two oldest national parks in the country. It covers an area of 13,000 sq. km. hence making it one of the largest national parks in the Democratic Republic of Congo. The park is a sanctuary for cheetahs, zebras, buffaloes, lions, leopards, elephants and the Katanga Impala which is endemic to the area.  Birders should expect to see the wattled crane, shoebills and spotted ground-thrush just to mention a few. Upemba like most of the national parks in Congo faces threats from poachers and militias. There are also human settlements within the park which has resulted in poaching, deforestation and encroachment on park land.

Like Upemba, Kundelungu National park is also found in the south eastern part of the country – Haut-Katanga province to be specific. It covers an area of about 7600 square kilometers and started as a Game parks in the Democratic Republic of Congo private hunting ground. Sport hunting was suspended and the area was gazetted into a national park. The park is home to crocodiles, porcupines, jackals, buffaloes, and small primates, various species of antelope, hippopotamuses, leopards, lions, zebras and snakes among many other creatures. A key attraction in Kundelungu national park is the Lofoi falls. These waterfalls rise 1,120 feet high and are one of the largest in the continent. In order to raise global attention to the conservation efforts needed to protect the park.

Get in touch with safari vacations and travel services for more inquiries and assistance in planning your trip to the Congo.